There’s a public drinking fountain in Baden-Baden called the Fettquelle. Dating from 1871, it’s a natrium-chloride-thermal spring that flows continuously into a stone basin. Writes Tina Ediss. 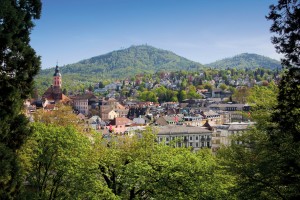 It sounds deliciously foreign but Fettquelle translates, unappetisingly, to fat source, though the water is said to be good for you. You need to take your own drinking vessel so I fill my empty water bottle and wait for it to cool. For me this is a delaying tactic. I’m still undecided whether my next step will be to the left or right.

To the left is the historical and elegant Friedrichsbad Spa which is traditionally for nude bathing – to the right is the Caracalla Spa, a modern, more modest spa where only the saunas are nude.

Baden-Baden, in south-west Germany, is a well-heeled city that feels like a town and poses, impossibly prettily, on the western fringes of the Black Forest. It used to be called Baden, singular, but was double-barrelled and hyphenated in 1931 to distinguish it from two other Badens, one in Austria and one in Switzerland. 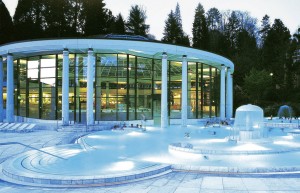 Baden-Badenis the grand dame of spas where hot curative water, 800,000 litres each day, rises from twelve springs at temperatures of up to 68C. The water contains minerals including sodium chloride, lithium, caesium, silicic acid, boric acid, manganese plus traces of cobalt, zinc and copper.

Built 125 years ago, the Friedrichsbad Spa is a Victorian “temple of well-being” and is probably one of the most famous spas in the world. It’s known as the Roman-Irish Bath because of the bathing ritual invented by an Irish doctor, Richard Barter. With its columns, lavish tiling and statues stood in niches, it’s very Roman.

There’s a route to follow, leading you around seventeen stations which include showers, hot air baths, a soap and brush massage, thermal steam baths, a whirlpool bath and cold water bath.

It’s a beautiful building – that’s what the brochures say – but you can only see it if you are nude. On Mondays, Thursdays and Saturdays men and women are separated in the two near identical halves of the building. They join at the circular bath under the soaring grand dome. 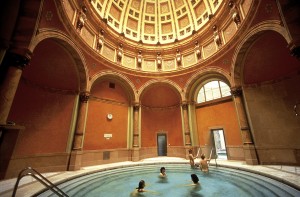 But this is Tuesday. On Tuesdays, Wednesdays, Fridays, Sundays and public holidays, all areas are mixed.

Hhmm, I’m not sure nude bathing is, well, terribly British, it’s just not something we are used to. I have several concerns:

What if people stare? What if they turn away? Which would be worse? Where would I look? Will I giggle like a school girl?

I head for the Caracalla Spa. It attracts between 1,500 and 2,000 visitors each day, so it must be good. I get ready in a cleverly planned changing room, shower and begin.

I just work my way around the spa. There’s a lot to try. I start in the rooms surrounding the indoor pool. The Saltwater Inhalation Room is too hot for me and I can’t manage the 10-20 minutes they recommend to “clean the mucous membranes”. Next I try the Aroma Steam Room. At first I can’t see much but when the steam lifts I can make out the marble seats and a twinkly ceiling, it’s lovely but too hot for me to linger. 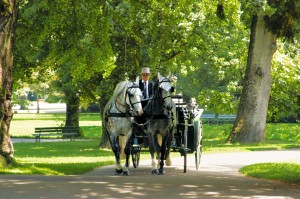 Basically I’m too much of a wimp for the steamy side of spas. Instead I spend much of my time in the huge indoor pool letting the massage jets knead my muscles.

I venture out to the outdoor pools. There’s a current in the outside lane that spins me around and surprises me so much that I squeal. Then I find a space in the whirlpool and really chill.

The time floats by, I think I’ve got the hang of this spa thing. I feel the water is doing me good and I’m completely relaxed.

It’s all very social, there are all ages here from families to seniors, couples to clubs. There are all nationalities too and all manner of shapes and sizes.

There’s also plenty to do if you want to keep your clothes on Baden Baden:

Go for an early morning balloon ride with unforgettable views across an awaking countryside.

Change your fortunes with a roll of the dice in the elegant Baden-Baden Casino, the largest and oldest casino in Germany. Guided tours are available.

See lots of beautiful, shiny works of art at the Faberge Museum.

Visit the Roman Bath Ruins and see how clever they were 2,000 years ago.

Take a stroll through Lichtentaler Allee, a beautiful landscaped park than runs through the city. 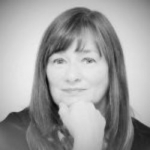