In the Catalan capital, Rosemary Bailey discovered the plus side of  looking mumsy……….

“You must be really careful in Barcelona,” I warned my son, en route to Madrid to study Spanish. “They are really clever, really devious. They’ll point out pigeon shit on your shoulder and pick your pocket as you turn your head…” Famous last words.

We saw him off on the train to Madrid. I felt as if the umbilical cord had been cut a second time.  After a few minutes pause in a little park for me to sob quietly, we set off to explore the city again – an hour or two wandering. We checked out the winding streets of the Barrio Gothic, admired art nouveau architecture in the Eixample and the eccentric glories of Gaudi. Everywhere were the distinctive red and gold Catalan flags, hung from windows and balconies. The vote was looming on whether Catalans wanted independence.

It was therefore somehow appropriate that we discovered El Born – a cultural centre devoted to Catalan culture and identity. It occupies an old market building, an elegant ironwork structure which was built over the ruins of a central neighbourhood destroyed in the terrible 15 month siege of 1714. It was September 11th that year when the Catalans finally lost their independence to Philip V and the Bourbons, and the date is remembered as their last brave act of resistance. Their language, customs and political constitution were abolished and 20% of the city was razed to the ground. People were obliged to pull down their own houses and a great citadel was built to subdue them. Such was the fate of a prosperous, sophisticated and powerful city,  considered at the time – at least by the Catalans themselves – to be the nerve centre of Europe.

El Born is weighted with significance. When the market was closed down they began to investigate the archaeological remains, a snapshot of the city in the 17th and 18th century: eleven city blocks of houses, streets and sewers. A rich cornucopia of diverse objects was unearthed: pottery, jewellery, evidence of the crafts, games, dance and music of that period. The original floor of the market building has been removed to reveal the excavated what is left of the streets and houses below, diligently restored and carefully described. (In English too). A museum and bookshop is devoted to the treasures they have discovered – and a celebration of Catalan history .

Lunch was in a small restaurant on the outskirts of the old town, our table tucked under the shade of a stone arcade. I was trying to resist looking at my phone, to check on my son’s progress. It was the beginning of September but in Madrid (I had noted with horror) it was still 37 degrees. I put my bag, a big soft brown suede sack bought years before in Figueres, firmly down. On the ground. Not hung over my knee or clasped in my lap as I usually did. Just on the ground.

Half way through the meal there was a tap on my shoulder. As I turned, a young man was passing the table. He just indicated to my other side. So I swung in that direction, looked down and… no bag. General hysterics. I glanced down the street, leapt up, glanced the other way to see the young man and his friend standing watching. I think they just shrugged. I ran off down the street, someone was yelling into a mobile phone, indicating another street. It all felt like a piece of theatre.

When I returned to the restaurant, the proprietor immediately offered us the lunch. Anguish. Just what I had warned my son….so I began to catalogue the contents of my large bag. No passport or carte grise, or many credit cards. I only carry what I need, Still this included my mobile, cash, a credit card or two, makeup, my notebook etc etc. We consoled ourselves with another glass of wine. Son called round about then. He was fine of course, apart from the news of my loss. Ahem.

About a half hour later there was a gentle thump in the street, and something slid towards me. A plastic bag, neatly tied. I knew of course. It was my bag. More hysterics. By now most of the restaurant was participating in my drama. Everything was there except for the phone and the cash. The restaurateur said he had never heard of such a thing happening before.

I mulled everything over for a while. Eventually I concluded that the tap on the shoulder was a trick, and they had probably got my bag while they watched me turn. But then I puzzled over why it was returned. I went through the contents, my notebook, a guide to Le Born, a Spanish phrase book . I flicked through my purse… one of the flaps displaying my press card from the British Guild of Travel Writers. Not a particularly flattering photo but one I liked, a friendly kind face, a bit, well, mumsy. I decided that the thieves must have been reminded of their mother. 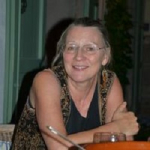