Travel writers tend to be in thrall to the coolest, hippest, weirdest places. We are thrill-seekers and truffle-hounds by trade, trained to sniff out the strongest-smelling story. Happiness is not high on our agenda. Pleasure is presented perfunctorily: a rural inn and gourmet restaurant make a pleasant side dish but are rarely the main feast. We feel the need to rush headlong into the next adventure while our readers might rather stay put.

After setting the scene in a charming Provencal inn, we prefer to frogmarch sleepy readers to the Roman ruins on the hill. From there, it’s onto a little light kayaking before lunch. All the time our readers are wondering why they can’t linger in the cosy inn and ponder lunch without the kayaking. Much like Michelin starred chefs, we sometimes forget that our clients want pleasure not preachiness, contentment not creativity.

We rarely write about our happiest hideaways, but here’s mine. Le Rouret, close to Grasse, France’s perfume capital, is far enough away to be forgotten by the Riviera set. With its bar, bistrot and boules pitch, it’s essence of Provence. It’s a place where bored cats follow you home, where old codgers play boules and where pot-bellied chefs reign supreme. Beyond the boules pitch and the occasional incursion by wild boar, this mellow stone village is devoid of drama. For must-see museums and galvanising art galleries, stay in Nice. For feasting, friendship and fun, stay here.

My playful bedroom in Hotel du Clos is a tribute to Provencal pastry shops of yore. I hang my towel on a rolling pin and go to sleep with a smile on my face, surrounded by lamps concocted from coffee pots, tea cups and cake moulds. I wake to a screen painted with pastries and am salivating already. Grey-green shutters open onto an olive grove and a table set for a breakfast of baguette, fig tarts, croissants and lavender jam. It’s perfect Provence, an autumn day pretending to be summer – in a rural inn not pretending to be a boutique hotel.

The boules team, a largely British affair led by a token Frenchman, is in action under the plane trees most mornings. The team, boosted by Brexit, is part of the proof that this is an open, inclusive community. Despite comparisons with the Swiss Model and the Norwegian Model, the French Model always triumphs here, at least in terms of quality of life.

The Bistrot du Clos prides itself on its delicious `democratic’ menu, where goat’s cheese tart and salad give way to grilled fish and ratatouille, beef stew and polenta, culminating in poached figs and ice cream. Even at Brexit exchange rates, the menu is a steal at 26 euro. Far more upmarket but equally friendly, the Michelin starred Clos Saint Pierre may be popular with Kate Moss and the King of Belgium but no one cares, least of all the chef, who hugs all his guests. Happiness is hard to paint but a bear hug from Chef Daniel comes close. 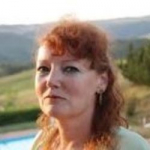