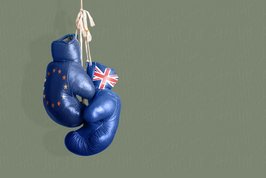 It might not have caused quite the same shock as the unexpectedly comfortable Conservative election triumph – but a show of hands at this year’s joint BGTW – ANTOR debate raised an eyebrow or two. About a quarter of those gathered to pick over the impact on travel of staying in or leaving the EU indicated they had not yet decided which way to vote. Conversation over drinks as we gathered at Gibraltar House in the Strand had suggested the meeting would be overwhelmingly – if not 100% – in the remain camp. We are, after all, travel people, disinclined to pull up the drawbridge, instinctively opposed to the slightest hint of isolationism. It should be noted immediately that no voices were actually raised in favour of Brexit.

The Gibraltar Government’s UK representative Albert Poggio opened proceedings with a reminder that a leave vote might eventually provoke Spain, not always a benign neighbour to the Rock into closing the border again.

Stephen d’Alfonso, ABTA’s head of public affairs, who called for the show of hands gave an impressively lucid description of the lead in to the June referendum and the ways in which the travel industry and its customers might be affected. He set out the difference between two kinds of European legislation: regulations, which must be applied across the EU and directives, which set out goals which individual members states must legislate to achieve. The rights of air passengers to claim compensation when hit by long delays were regulations. Other aspects of travel on which a Brexit would throw doubt included current freedom of EU airlines to operate in all 28 member states, the reciprocal European Health Insurance Card agreement, financial protection for travellers – and a potential fall in the value of sterling. A report commissioned by ABTA had concluded that a vote to leave would lead to uncertainties and might increase costs for the industry and its clients. Outlining the various kinds of relationship Britain might have with Brussels following Brexit, Mr d’Alfonso, a Canadian, said his country had taken eight years to negotiate a trade deal with the Brussels. Both he and Roger Bray, who also spoke, noted that Norway, which is closely associated with the EU as an EFTA (European Free Trade Association) member, contributed m ore per capita than the UK.

Roger argued that the overall level of knowledge among the electorate was so low that the referendum should not have been called in the first place. Even so-called experts had no clear idea of what would happen if we withdrew. He agreed with Roger Macdonald, that a potential Brexit posed a serious threat to travellers’ choice of low cost flights. It might create barriers to UK airlines wanting to establish bases in other EU states (eg easyJet) or those such as Wizz that seek to operate here from a range of EU countries. And if EU citizens were no longer able to travel here freely airlines might be unable to sustain routes to some less familiar destinations. He said Britain would not longer have a vote at the European Air Safety Agency if we withdrew. But where financial protection for travellers was concerned, Brexit might not be such a bad thing. It might mean the UK didn’t need to introduce rule – currently being proposed that passengers hit by the collapse of travel companies must seek recompense in the operator’s “place of establishment”. It was not clear what “place of establishment” meant, and efforts to interpret the rule would mean long running legal argument.

From the floor Ferne Arfin, who had been observing the in-out debate as an American, said while we had attempted to deal in facts, it was clear many votes would be swayed by emotion. Roger said his emotional attachment to the remain lobby derived from a post war desire to avoid a repeat of such conflict. It had been a thoughtful and informative discussion but, as chair Tracey Poggio* put it, nothing had been resolved.