Last winter I was enjoying the ride north from Rovaniemi, the provincial capital of Finnish Lapland, to Levi, one of Finland’s liveliest winter activity resorts, a couple of hundred kilometres north of the Arctic Circle. I had only just met my driver and travel companion Tomi when he asked me what the most exotic place I’d ever visited was.

I looked around at the birch trees, transformed into drooping arches and tunnels of creamy white and the exquisite pink half-light of the mist in the valleys. The landscape, gripped in a frost of minus 25 Celsius, sparkled with a magical, surreal glow, like some imagined other planet. Right now, I said to Tomi, I can’t remember anything more exotic than this.

One of the great attractions of Finland in general but especially of Lapland is the accessibility of Europe’s last real wilderness to the comforts of the 21st century. In Lapland, a part of the world that is home to as many reindeer as people, the hotels, chalets and cabins are invariably cosily heated. The safari tour operators, offering spectacular adventures over the rolling fells and through the snowbound forests by snowmobile or husky sled, provide the warmest conceivable clothing to their customers. Just as well, when temperatures can dip way below minus 30 in the depths of the kaamos period, when the sun simply refuses to rise but when the snow reflects an eerie blue glow.

Nobody needs to rough it or suffer frostbite, but everyone gets the chance to enjoy the ample natural wonders. On clear nights these regularly include the jaw-dropping phenomenon of the Northern Lights, to my mind on a par with volcanoes erupting, multiple forks of lightning and total eclipses in the pantheon of humbling and enthralling elemental experiences. Curtains and shafts of coloured light shift and coil across the sky, as if controlled by a giant invisible puppeteer. Living in Finland, I’ve been lucky enough to witness the aurora on many occasions but I am invariably reduced to gibbering childlike excitement at its apparition.

In Finland the aurora borealis is known as revontulet or ‘fox’s fires’, in reference to an ancient myth propagated by the indigenous Sámi inhabitants, that a giant animal flicking the far-northern mountains with its tail causes this sensational display. It must have been so much fun before science came along with its sensible explanations and jargon about solar storms and KP indexes.

At the end of our drive, and after an exhilarating snowmobile adventure across a frozen lake, we ended the obligatory sauna visit with a beer or three in the hot tub overlooking the valley below Levi. The Northern Lights formed an arc over the snow-laden pines, a distraction from the total clarity of the star-studded night sky. For these moments at least, it was absolute, unbeatable exotica.

THE MAJORITY OF FINNISH LAPLAND IS ABOVE THE ARCTIC CIRCLE 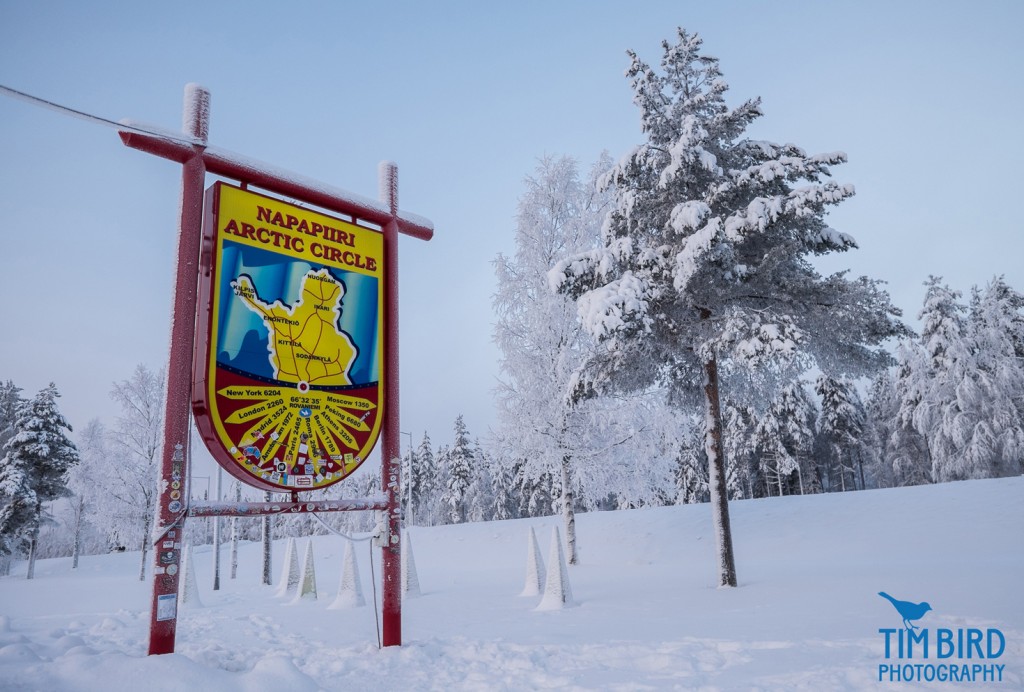 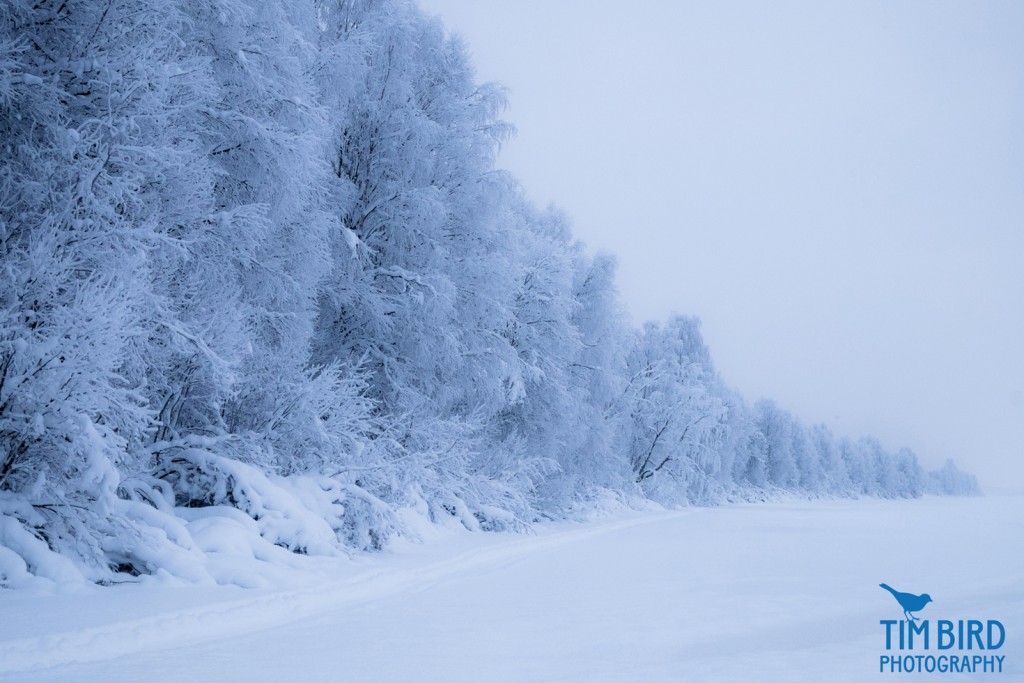 REINDEER SAFARIS ARE ONE WAY TO PENETRATE THE SNOW-COVERED FOREST 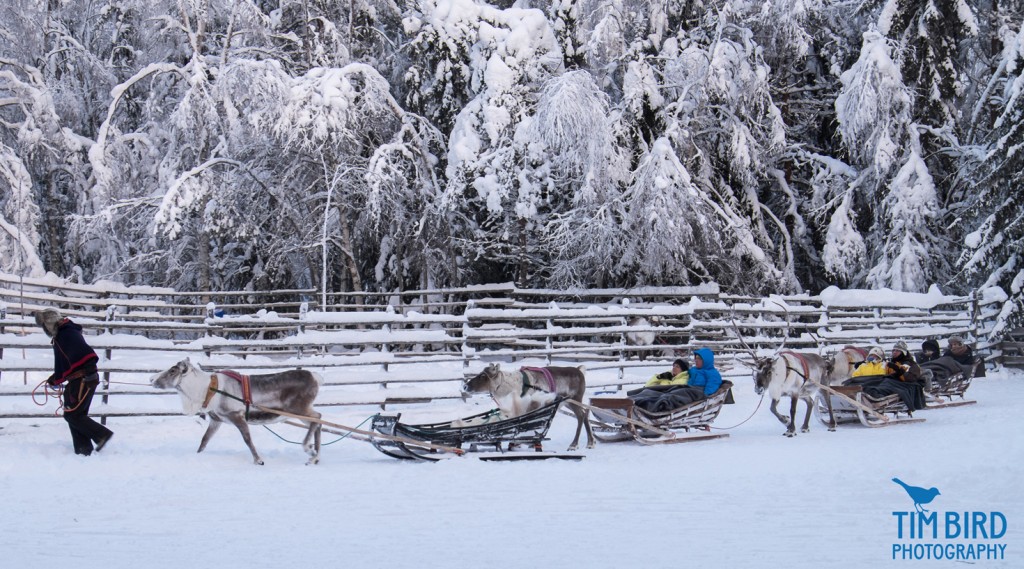 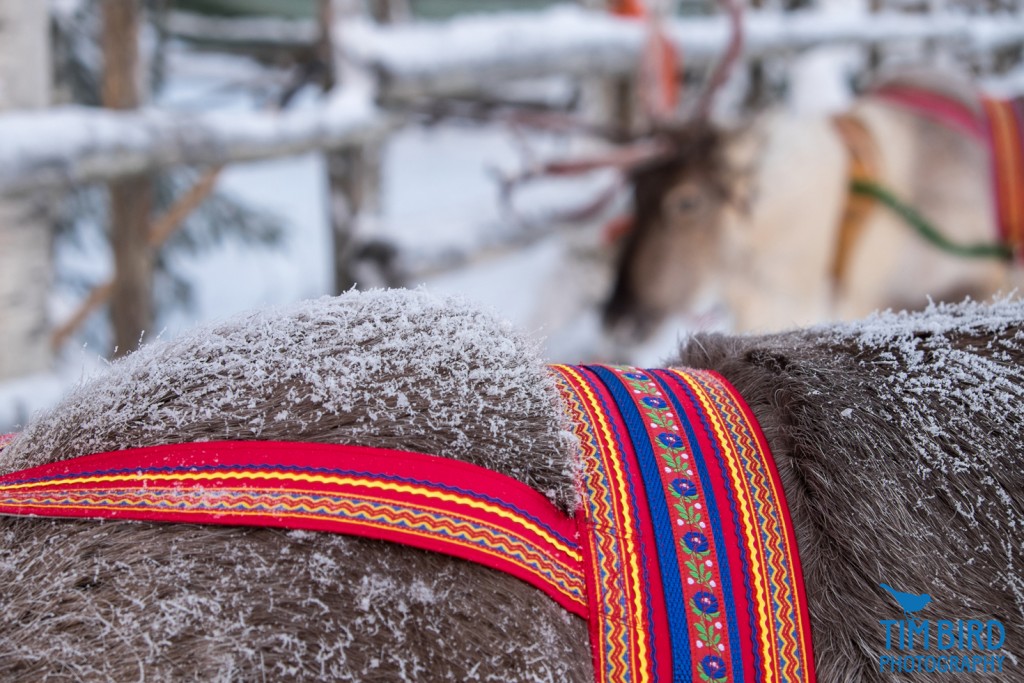 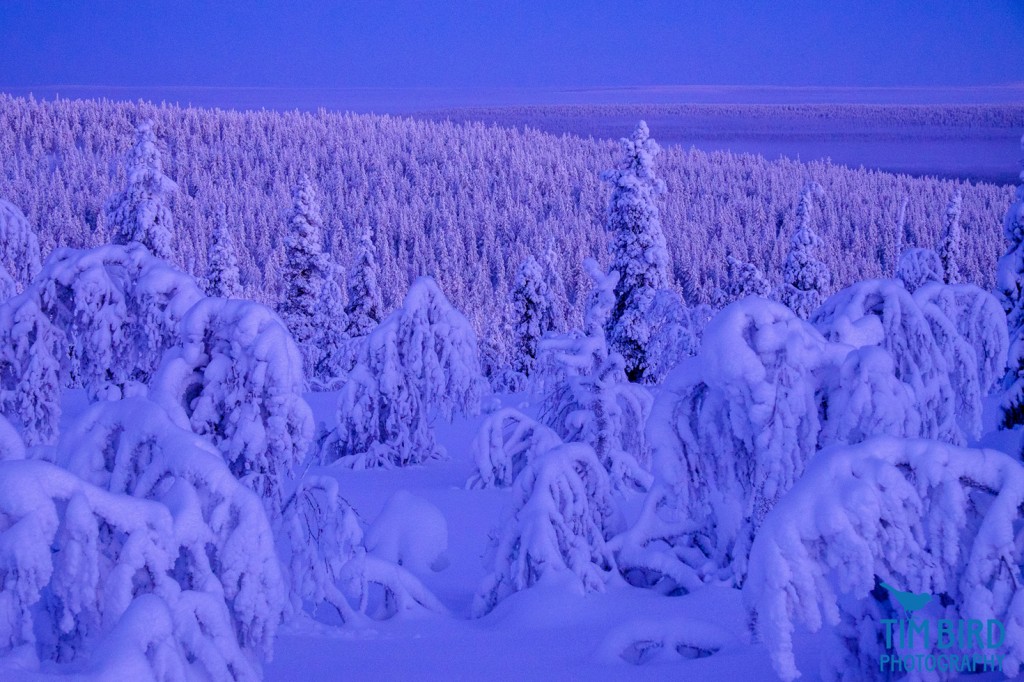 AS IF ANGRY TO BE DISTURBED, THE SUN SHEDS FIERCE RED LIGHT AS WINTER PROGRESSES 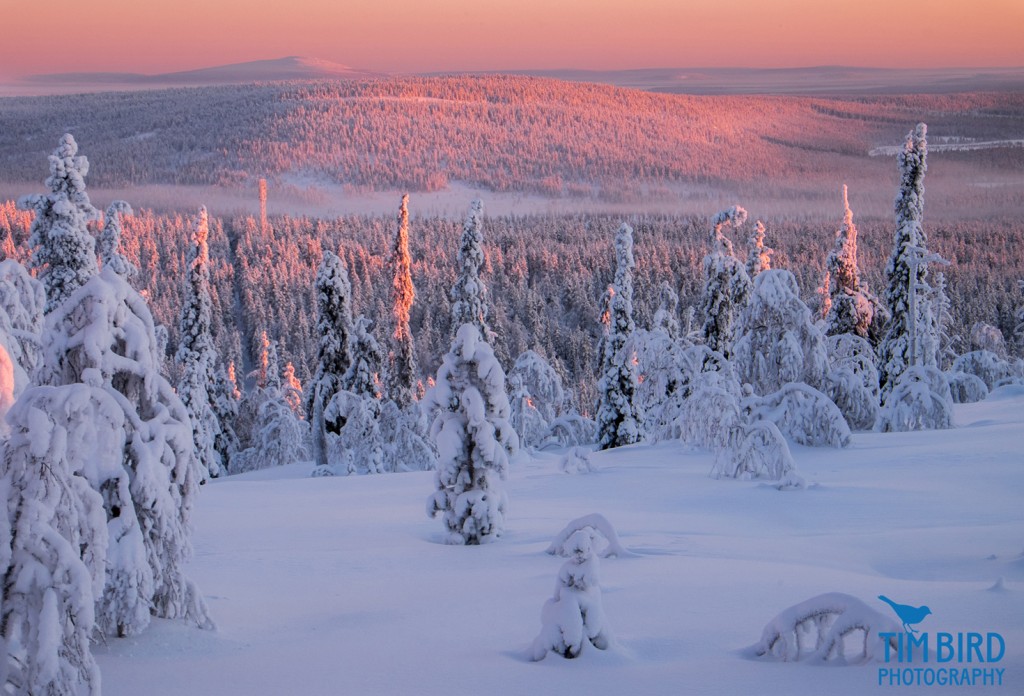 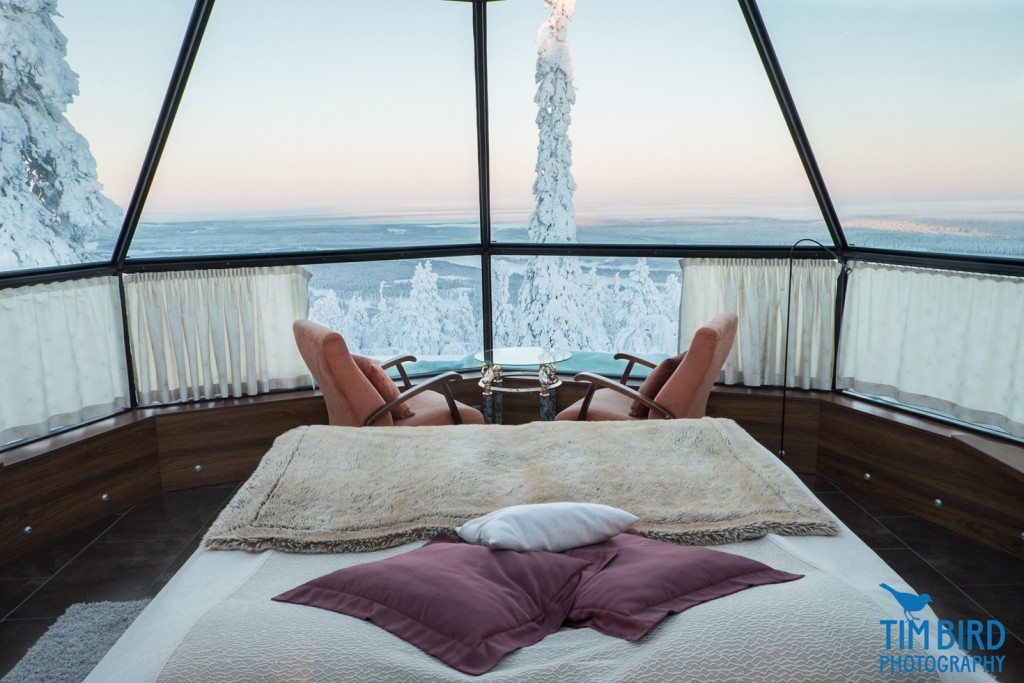 A HUSKY SAFARI THROUGH THE ENCHANTED WINTER FOREST 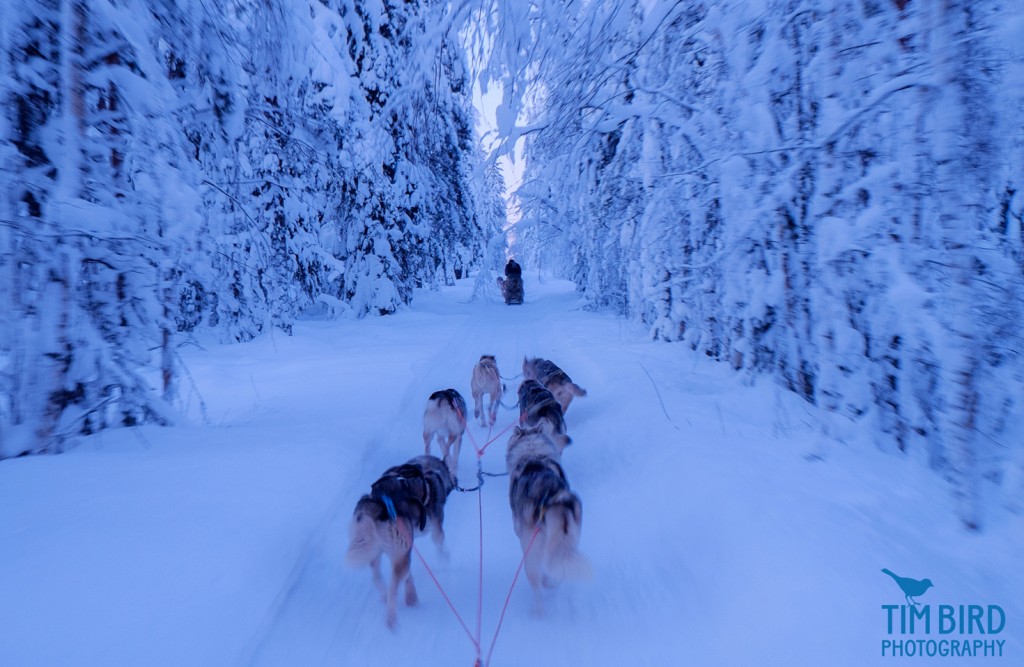 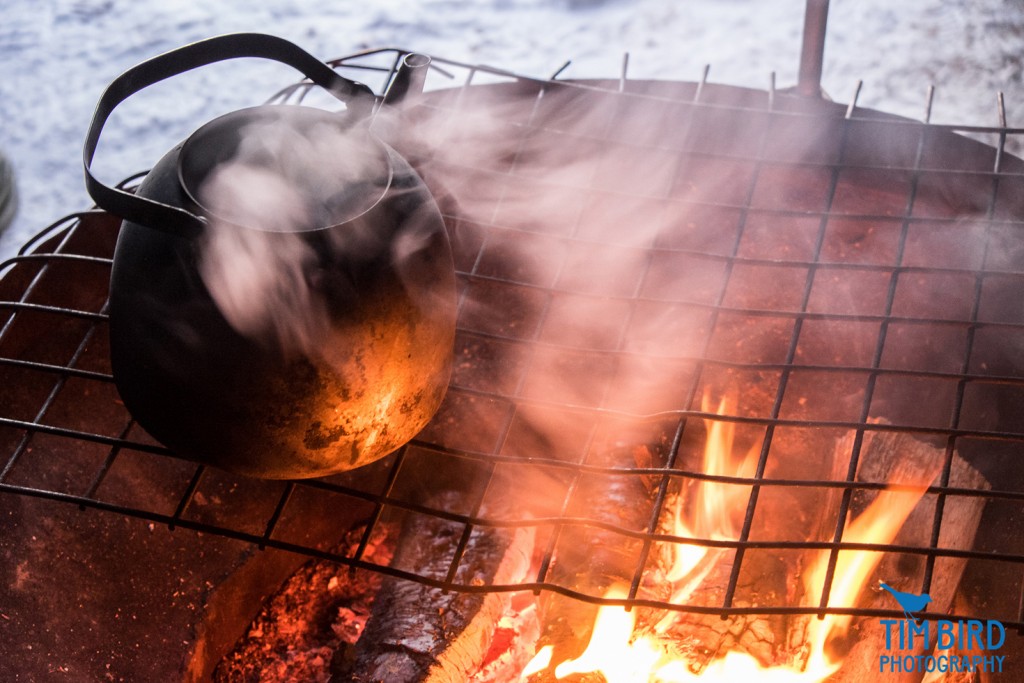 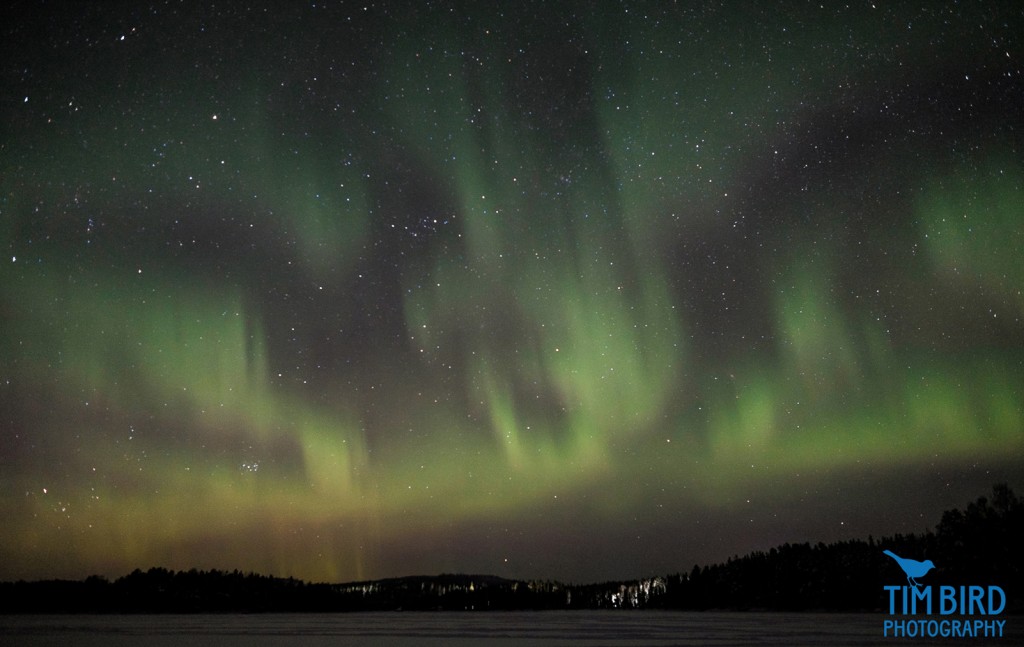 CORRIDORS OF ICE AT THE LAINIO SNOW VILLAGE 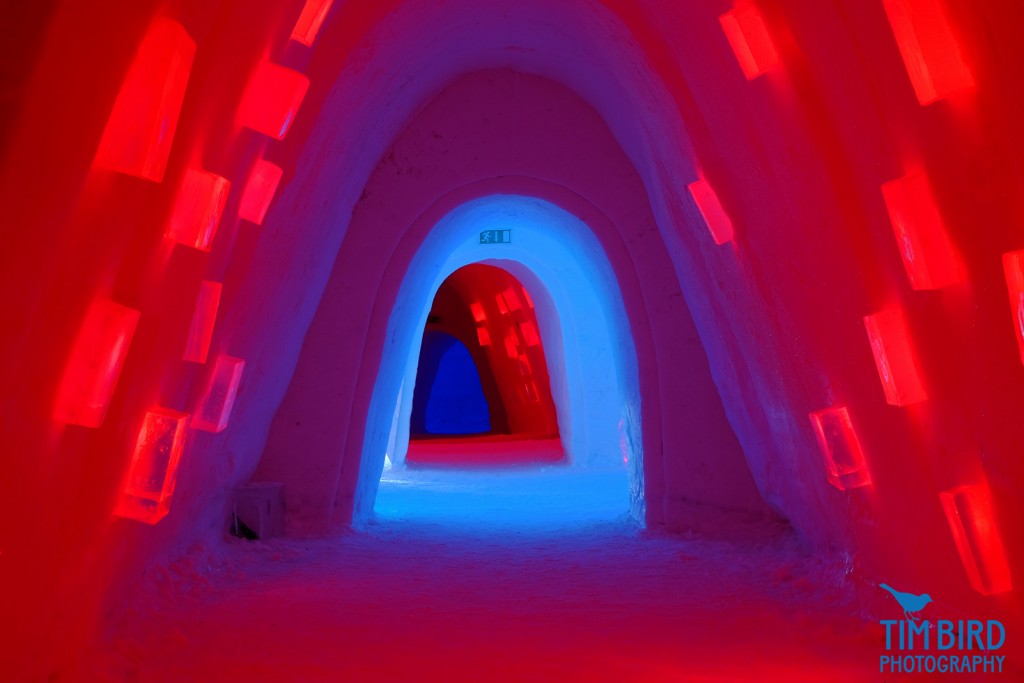 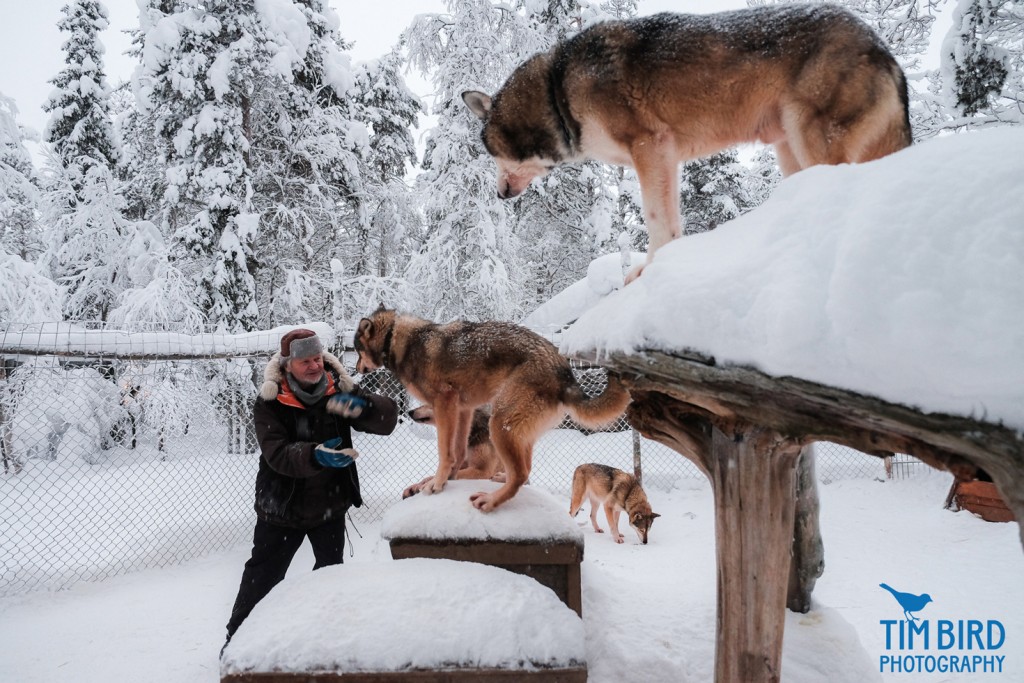 Visit Tim Bird’s website to see more of his photographs.