80 years after Hitler was given the mountainside retreat above the market town of Berchtesgaden for his fiftieth birthday, Heidi Fuller-love pays a chilling visit to Obersalzberg.

Cars buzz along the busy main road to the Bavarian resort of Berchtesgaden far beneath us, but a wild wind whisks away the noisy snarl of traffic. On all sides there are rolling pastures hedged by pine trees, whose jagged profiles add a touch of menace to the bucolic scene. Ahead of us stands the mighty Untersberg Mountain, where legend says Charlemagne lies sleeping in a cave awaiting the next leader to rule Germany.

I’ve read many books about the Obersalzberg, the mountain retreat where Adolf Hitler commanded some of the key events of WWII, but nothing had prepared me for the sensation of entering this forbidding Alpine fortress. Germany’s future leader first came to this vacation spot in 1924, after a spell in Landsberg prison for his role in fomenting the 1923 Munich putsch.

Renting a small cottage, he wrote the second part of Mein Kampf and later used the profits to buy a house here. The man who had the job of turning this resort into a Nazi playground was Martin Bormann, Hitler’s private secretary and head of the Party Chancellery. As well as lodgings for the SS, Bormann commissioned a bowling alley, a cider press, outdoor swimming pools and a vast greenhouse for Hitler, who was a vegetarian.

Seduced by sunlight and fresh air, the Führer started spending more time in Obersalzberg than in Berlin, and soon his main henchmen – Goering, Himmler, Hess, and Goebbels – followed him.

“At first local residents who had houses on the mountain were paid to leave. If they wouldn’t go, however, they were ‘persuaded’- they’d come home and find the roof missing from their house or their belongings moved out into the street,” Tom, my guide from Eagles Nest tours, explains.

We pull up outside the Hotel Zum Turken. The alpine-style façade has barely changed since this family-run hotel was commandeered to house Hitler’s security team. Tom points out a small pockmarked door hidden beneath tufts of grass in the bank of the hill opposite. It is the tunnel, now sealed, that once led to the central SS bunkers and the house of Adolf Hitler and Eva Braun.

On a steep hillside nearby, Tom shows me a few slippery steps hidden beneath leaves and grass. It’s all that remains of Hermann Goering’s sprawling rustic-style lodge.

Like most of the Obersalzberg, the house of Hitler’s deputy was destroyed during carpet bombing raids carried out by the Royal Air Force on 25 April 1945. Later, in 1952, as one of the conditions for the return of the Obersalzberg to German control the remaining houses, including Hitler’s Berghof, were reduced to rubble. Brambles and lush grass soon colonised the site where Hitler and his cronies once plotted world domination, but not everything was destroyed.

In 1999 workmen tearing down the Platterhof, the hotel where Hitler housed his most important guests, discovered a vast complex of tunnels that had been sealed since 1945.

Tom takes me to the Documentation Centre that was built over the tunnel complex. Slipping past the crowds, we head for the tunnels. Built in 1943 when the allies began to turn the tide on Nazi Germany, this subterranean labyrinth was built to provide a retreat for Hitler and his closest advisors. We walk the long echoing corridors carved out of the solid rock face, stopping to decipher graffiti, or to peer into empty rooms that served as storage spaces for crates of French champagne and Goering’s collection of stolen art.

Leaving the tunnels, we hike back up the hill toward the wooded spot where Hitler’s Berghof once stood. Little remains of the house, or its vast terrace where Eva Braun – much to the dictator’s disgust – occasionally sunbathed in the nude. Only a low stone wall tells us that we are in the Great Room of the Berghof, with its marble fireplace, chandeliers, and costly rugs, where Hitler entertained the Duke and Duchess of Windsor in 1937. The centrepiece of this room was a 25-foot-high picture window.

We stand on the spot where the window would have been. High above us the Eagle’s Nest, the tearoom that Bormann commissioned for Hitler’s 50th birthday, is wreathed in clouds. It cost around 30 million reichsmark (worth around 600 million French francs in May 1940) to build this miracle of engineering, perched high on a peak of the Kehlstein mountain. Whilst it was being built, the country’s Jews were dying in concentration camps.

Tom shows me an archive photo. The view is unchanged. We stand for a long time, staring out at this vista Hitler so admired. As the sun descends in a scarlet blaze the Berchtesgaden Alps – whose snow-tipped peaks divide Bavaria from Austria, the dictator’s homeland – cast dark shadows on the habitations that cluster, small as dolls houses, in the valley far below. Struck by the icy alpine cold and the juxtaposition of this beauty with the ugliness of the Nazi leader’s regime, I start to shiver. 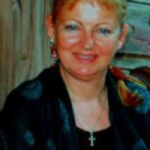