Life returns to the Caves of Matera 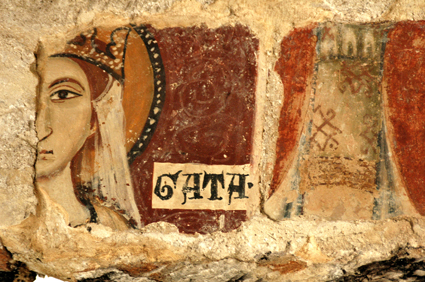 First impressions of Matera are somewhat underwhelming. The newer buildings on the outskirts are the familiar mixture of residential tower blocks with shops and cafes at ground level interspersed with public and commercial buildings. Press on towards the Baroque town centre however, and by the time you reach the Piazza Vittorio Veneto you realise you have arrived somewhere extraordinary.   From here you get the first glimpse of the celebrated Sassi, the ancient troglodyte settlements at one time considered slum dwellings but which, since 1993, have been designated a UNESCO World Heritage Site. 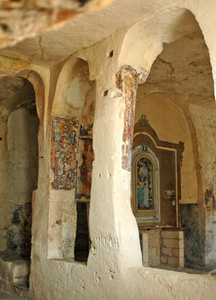 While many cities choose to draw a veil over their less salubrious quarters, Matera has created shady railed viewing places, like boxes at the opera, where the Sasso Barisano and the Sasso Cavaseo may be enjoyed as architectural theatre. Perhaps most significant are the rock-hewn churches of the 8th to the 13th century. More than one hundred and fifty of these are recorded. Many are open to visitors. These are naturally occurring caves which were further excavated to become hermitages and chapels for refugee monks from the Byzantine empire, Most easily accessible are Santa Lucia alle Malve and Santa Maria de Idris. Both churches are rich in frescoes. Other churches include, S Giovanni in Monterrone, Convicioni di S.Antonio, Santa Maria de Armenis and Santa Barbara. For hundreds of years, long after they had ceased to be places of worship, these churches became homes for families and their animals where people struggled to survive in conditions of appalling poverty and disease.The social cohesion of centuries faltered. Sophisticated systems of collecting and storing rainwater, developed over many centuries, failed. The city fathers wrung their hands. Rome, meanwhile, knew nothing or cared little for “The problem of the South”.

A turning point came with the publication of a celebrated memoir, Carlo Levi’s Christ stopped at Eboli. Levi was a doctor, a painter and political activist from Turin. His anti fascist stance landed him first in prison and later to internal exile in a remote and barren corner of Lucania, now Basilicata. His book, a profound and sympathetic study of the lives of the people he met, and sometimes ministered to as a doctor, helped to propel the problem of the south into national discourse. In a much quoted passage he reflects on how he had entered a world cut off from history and the state, hedged in by custom and sorrow, without comfort or solace, where, eternally patient, the peasants lived in an age old stillness and in the presence of death – for Christ did stop at Eboli.

Levi’s sister Luisa, also a doctor, sought permission to visit her brother in exile. Her journey from Turin took her in a roundabout way, via Matera. While waiting for the bus to Aliano (Gigliano in Levi’s memoir) she went to the Sasso Caveoso, likening her visit to Dante’s decent into hell. She looked into the caves where children lay in rags on the earthen floors, their teeth chattering from fever. In the baking sun she found herself surrounded by stark naked children calling out to her in their native dialect. At first she thought they were begging for pennies for sweets but soon grasped the sense of their pleading. “Signorina, dammi ‘u chini! Signorina”, give me some quinine. Children were sitting on doorsteps in the hot sun with their eyes half closed, their eyelids red and swollen, flies crawling across the lids.   In this hell, she told her brother, twenty thousand people live.

Levi’s memoir unleashed a groundswell of public indignation across the whole of Italy. The prime minister of the day, Alcidi De Gasperi, declared their situation to be “Italy’s shame”. The caves were blocked up. Many older people cherished memories of how, in less crowed times they had been happy, their children healthy and the water in the cisterns beneath there homes ran crystal clear.

For more than thirty years the Sassi were virtual ghost towns. UNESCO deemed them to be an historic habitation to be listed amongst the many hundreds of sites in the world considered as “property of mankind to hand down to posterity”. The “property of mankind” is currently in a state of rapid development. In the more accessible caves boutique hotels, art galleries and restaurants have blossomed. A modern call centre, working from a group of interconnected caves, employs hundreds and is Matera’s third biggest employer. Less entrepreneurial, but perhaps more heart warming, is the news that some restored caves are being allocated to newly weds.

Basilicata has for a long time been a popular film location. In all, some twenty-five separate productions have been filmed in and around Matera since 1949. At the same time it has also been working at its growing reputation for modern cuisine. Thus, in the city that served as a backdrop to the Crucifixion scene in Mel Gibson’s The Passion of Chris, I ate Linguini alla Mel in a restaurant on Via Lucania. 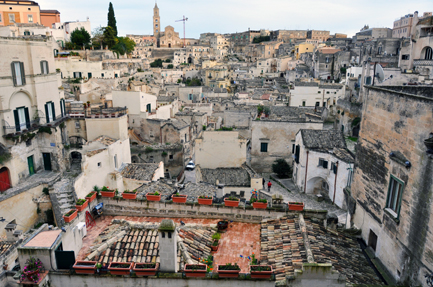 Matera’s most celebrated patron is the Madonna della Bruna. The Festa della Bruna begins at dawn on July 2 each year when The Procession of Shepherds leaves the Cathedral followed by the costumed Cavalcade and the Carro Trionfale (the triumphal float) bearing the figure of the Madonna. This extraordinary work in papier-mache is recreated each year by local artists. The parade ends at sundown as the figure is carried into the Duomo. The excited onlookers fall on the float and tear it to pieces to the accompaniment of pealing bells, and exploding fireworks. Fragments of the Carro are treasured as tokens of good fortune for the coming year.Such a talisman was thrust into the hand of that most distinguished traveller H V Morton as he was preparing to leave for Naples. In his book, A traveller in Southern Italy, he describes the Sasso as looking like the work of termites rather than of man. He broke his journey north at Grassano, the place of Levi’s first banishment. Morton describes how he encountered a rather well dressed gent accompanied by a priest. Were they familiar, he ventured, regretting his impulse even as he spoke, with Carlo Levi’s memoir. After a brief pause, the well dressed gent retorted: “Christ stopped at Eboli, such wickedness! Christ is everywhere!”. The priest’s spectacles flashed approval and confirmation, and together the pair turned and continued their walk

British Airways and Ryanair fly to Bari. The regional “Apulo Lucane ferrovie” rail link runs from there to Matera. The journey takes 90 minutes.

The B&B  Il Vicinato is in the heart of Sasso Cavaseo.