Nudist beaches – who are they really for?

According to the National Trust, up to 5,000 people visit Studland Beach’s naturist site on a busy summer’s day. That’s a lot of bums and boobs to the uninitiated; actually that’s just a lot of bums and boobs full stop. And demand is clearly on the rise, as the Trust has recently expanded the nudist area following requests for more space from naturist groups. Writes Sarah Siese.

With a history going back as far as the 1920s, naturism has become part of the landscape, so to speak, along the Studland peninsular, which is Britain’s best known naturist beach today. So what makes it so popular? 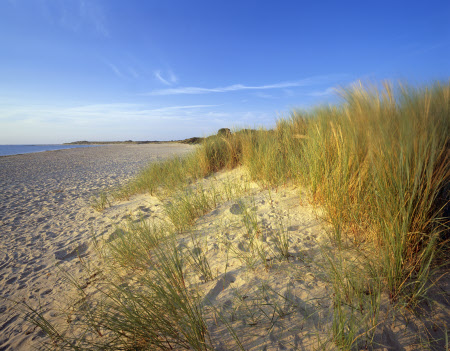 I can confess to little topless bathing myself, but that was as a teenager in St Tropez, where I’d have been more conspicuous with a top on than off. And in those days I had two perfect poached egg breastlets worthy of note. Things have gone south, east and west since then and any attempt to de-robe in public brings convulsive protests from my prudish teenage daughters. Unlike my 18 year-old godson son who trotted off with a school friend to sunny Spain last summer, happy to reveal all at the nudist resort where they were staying.

Our strait-laced attitude to nudity in Britain is an amusement to our continental cousins, in whose climes nudity is much more commonplace, especially in the saunas and health clubs of Scandinavia. Getting your kit off doesn’t automatically equate to a Benny Hill night of raucous romping. It’s natural, liberating and practical say its fans.

The fors and againsts are I split into two defined camps: those who haven’t, and those who have – the majority of whom say they’re happy do it again.

So if it’s just ignorant prejudice that’s preventing us from giving naturism a go, consider the arguments and decide for yourself if your perceptions are valid.

Those against say they would feel really awkward walking around naked in front of a bunch of strangers; others think that it might be alright with strangers but wouldn’t do it with friends. Regular nudist fans affirm that after 15 minutes you will forget you’re nude; for the most part nudists are a genial lot more interested in community rather than judgmental slings and arrows.

Those nervous of getting their kit off say that it attracts singles looking for a partner. Is nude rude? Does nude equal sex? They say modesty is a virtue and it’s inappropriate for young children who haven’t seen nudity before.

The defenders of the cause reply that most people go to nudist beaches as couples. Humans only started wearing clothes 72,000 years ago – so for more than half our existence humans have all been nudists. Just like any other beach, sex is off bounds. Nudist beaches are not sexually charged environments and any kind of hanky-panky is a big no-no. Parents say that children are naturally curious and relaxed around nudity.

Aside from the above people joke that it’s full of middle-aged people with saggy bits – it’s cringey they say. Not so cry nudist fans. We come in all shapes and sizes and rarely resemble super-model images of the media icons – a healthy fact for adolescents to embrace. Naturism is attractive to people of all ages not just middle-aged men. It’s natural and liberating. Nudity is an outfit most people never wear, but when they do it becomes their favourite.

And if you do decide to give it a go: remember to put on the sunscreen; don’t stare, it’s rude (or wear sunglasses if you must); keep your camera at home; and lastly be sensitive to your neighbours when you have to bend over – you are allowed to use a towel.

About the author – Sarah Siese

Sarah is a writer and editor and runs the Heaven on Earth holiday website.