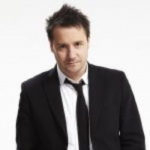 Biography :
JON HOLMES is a double Bafta award winning and eight-time Radio Academy award winning travel writer, comedian and broadcaster.   As a freelance travel writer – amongst many other passport bashing adventures  - Jon has learned to scuba dive on the SS Thistlegorm under the Red Sea, biked the Tiger corridor of Northern India, trekked the Himalayas, been swimming with blue whales in Sri Lanka, spent time with mountain gorillas on the Rwandan / Congolese border, photographed jaguars in the Pantanal and the Northern Lights above the Arctic Circle, ‘enjoyed’ crocodile hunting with the natives of Papua New Guinea, been unnerved by giant spiders in the rainforests of Costa Rica and was hospitalised by a colony of sea urchins off the coast of Puerto Rico.  He’s also came very close to drowning in a Class 4 rapid, was threatened with jailtime in Texas, got escorted from the mysterious Area 51 in the USA by sinister men with guns and sunglasses and, perhaps most dangerously of all, tried (and failed) to learn to perform a Punch and Judy show on Brighton beach in front of an audience of increasingly angry children. He's been twice nominated for Travel Writer of the Year, and once for Travel Broadcaster of the Year.   When logistics permit, Jon also lugs camera gear round the world with him, and his photographs have been published in actual newspapers.  His radio documentary Saving Mountain Gorillas recorded in the jungle on the Rwandan / Congolese border earned him a ‘Best Broadcast’ nomination at the 2017 Travel Media Awards.  Added to this, Jon has hosted his own shows on BBC Radios 1, 2, 4, 5Live and BBC 6 Music, written for the likes of Harry Hill, Graham Norton and Stephen Fry, thrown week-mocking jokes at Mock The Week, helped to develop the CBBC hit Horrible Histories from its journey from book to screen, (along with co-writing the first 5 series) and worked alongside Armando Iannucci on both radio and TV. Also on TV Jon hosted Channel 4’s 11 O’Clock Show (after the other bloke left), occasionally crops up on things like Newsnight or The Wright Stuff and recently made acting debuts in Crackanory and Channel 4’s controversial drama 100 Days of Ukip. His BBC Radio 4 series Listen Against (4 series to date) is 'sublime, glorious', 'a worthy successor to On The Hour' or 'so funny that it rearranges everything you thought you knew' depending on whch newspaper you read, he co-created the multi-award winning Dead Ringers and you may know him as the short one from off of BBC Radio 4’s The Now Show. He also regularly hosts the BBC Radio 4 Extra Comedy Club. Alongside all this, he hosted the Xfm Breakfast Show in London for 3 years (where he was twice nominated for Presenter of the Year’).

Jon is the author of four books, the latest ‘A Portrait Of An Idiot As A Young Man' ("Poignant, charming... a masterclass in comedy writing" - Press Association) was published in Paperback by Orion in 2017.