Posted on September 19, 2016 by Gillian Thornton

BGTW stalwart Gillian Thornton recounts a close encounter with a bore that’s anything but………. 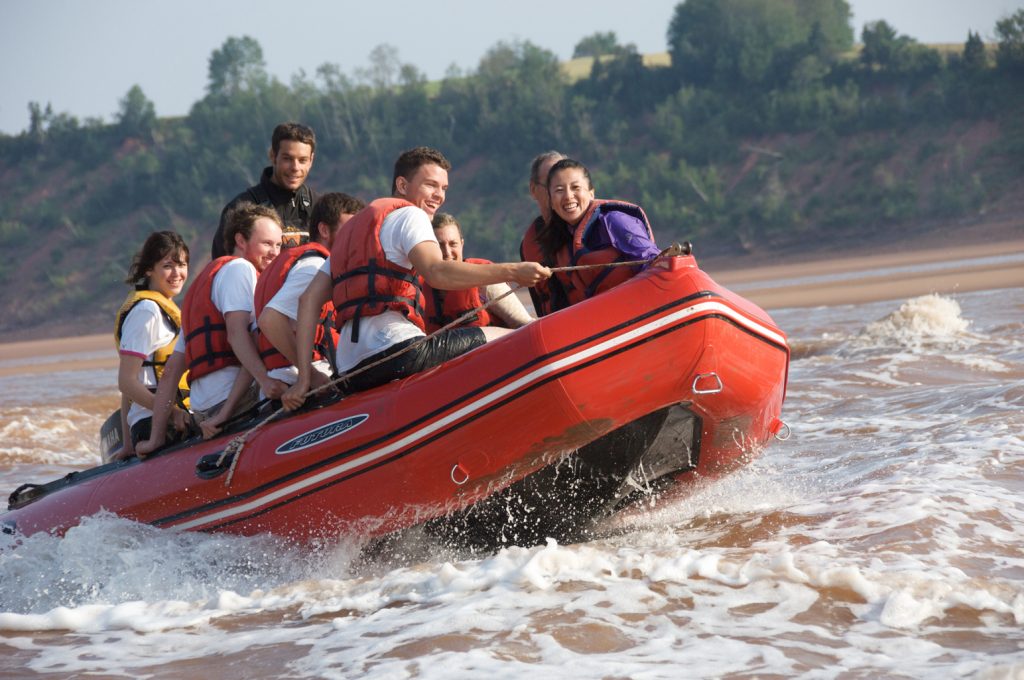 Snatches of Tony Bennett wafted through my brain as I dropped my trusty trainers over the balcony into the random heap below. Tony left his heart in San Francisco; I was leaving my shoes in Nova Scotia. It was a strangely emotional moment.

When you ride the tidal bore that sweeps up the rivers flowing into the Bay of Fundy, you need to wear old gear. ‘Clothing should be dark or old as the river may stain them’ warned my itinerary.   I imagined getting splashed with water rich in local red mud.   Nowhere, however, did I see the word ‘drenched’.

Twice a day, 100 billion tonnes of water flow into and out of the funnel shaped bay that separates Nova Scotia in the south from New Brunswick. Huge tides reverse the flow of some of the rivers that carry that water  and I was about to ride one of them, the Shubenacadie, starting from the Tidal Bore Rafting Resort. Just a short drive away, the sheer red cliffs at Burntcoat Head mark the official location for the world’s highest tides. 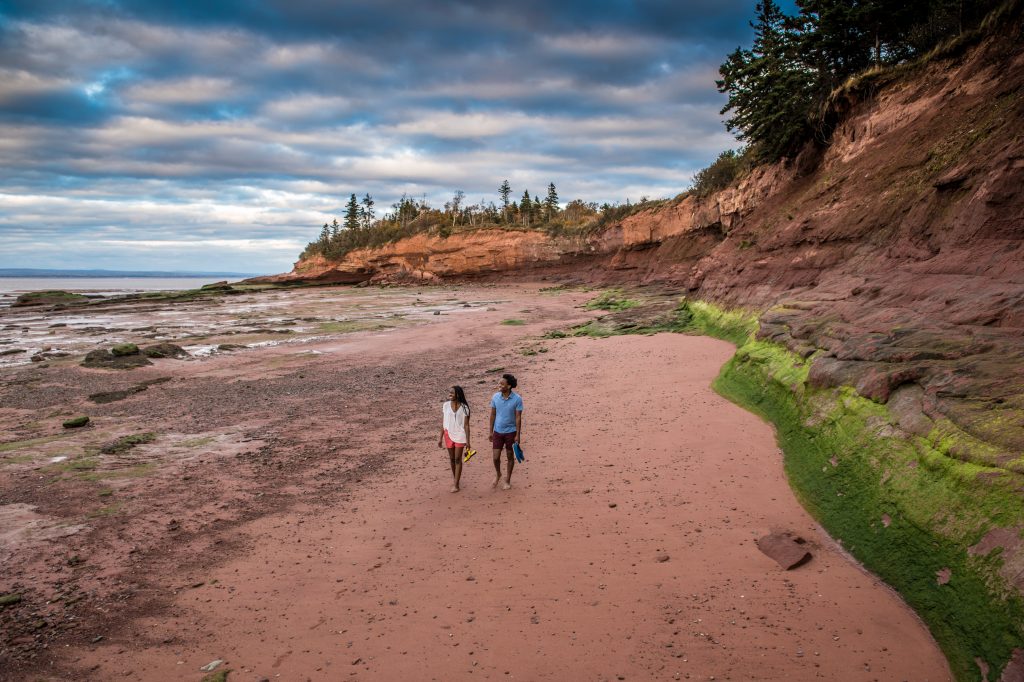 In my head, I saw an elegant wave rolling upstream, our RIB poised serenely on the crest.   Reality began to dawn as we changed into our stainable clothes.   OK to take cameras? Not unless waterproof.   Best to take my watch off too then? Yes, and if you don’t need those sunglasses, leave them too …

Minutes later, dressed in scruffy gear, lifejackets and old trainers – our own or borrowed from Tidal Bore Rafting – a slightly nervous group of adventurers walked down the woodland trail to the river bank.

First hazard was stepping off the wooden walkway into soft gloopy mud, the potential for sudden sit-down so enormous that I clung on to Nick, our rugged and helpful pilot, like a child.   Then it was into ankle-deep water before clambering inelegantly into the RIB and sitting sideways along the rim, the rope held firmly with both hands.

Not that we needed to grip hard as we pootled leisurely downstream behind three other craft.   The searing heat of the day had subsided into soft evening sunlight. The water was so shallow that at times we got out and walked beside the craft.

But the adrenalin cranked up a few notches as the bore effect came into view.  Delayed on the road, we missed the sight of the initial wave that heralds the meeting of two waters. By the time we reached the action, the chocolate brown water was rearing up in a swirl of choppy waves.

After a few practice bounces on the edges of the turbulence, Nick turned us headfirst into the raging water and we rode the first few waves before a particularly big one slammed over the bow, soaking us all to the skin. We shrieked, but with exhilaration, not fear.   Nick rose to the challenge, steering us into the swell, then circling to give us a breather.    Funny how quickly you learn to laugh with your mouth shut when a wave’s about to break.

Our stomachs hurt with laughter as we enjoyed some of the most ridiculous legal fun you’re ever likely to have as an adult. Then suddenly, after nearly an hour, it was all over, the river sufficiently full for incoming and outgoing flow to meet peacefully.

On the way back, there was the chance to float in the warm, still river and – as if more fun could possibly be an option – an invitation to slide down a slippery mud bank.   Stained?   The mud-sliders morphed into red tribal people, barely unrecognisable to their companions.

Back at base as darkness fell, we cleaned up in outdoor eco showers before a private al fresco dinner with delicious Nova Scotian wines. And for me, a fond farewell to my trusty trainers. They’d carried me on many a European hiking trail. Now they have a new life as part of the help-yourself heap, just waiting to be picked for another thrill ride down the Shubenacadie river.   Must say, I really rather envy them …