The Christmas markets of Stuttgart, Germany

Posted on December 1, 2014 by Stuart Forster

Across central Europe, Christmas markets prove a popular draw during Advent. To gain first-hand experience one of Germany’s markets I head to Stuttgart in the south-western state of Baden-Wuerttemberg.

The oldest document mentioning a Christmas market in Stuttgart dates from 1692 yet historians believe the tradition of hosting Weihnachtsmärkte – as the markets are known in this part of the world – was established significantly earlier. They originated as places for locals to purchase seasonal foodstuffs, including Lebkuchen (spiced ginger bread), and to socialise. That element is still evident today, though they also stock a wide range of handcrafted gifts and decorative items, including glass baubles, silver jewellery and beeswax candles. 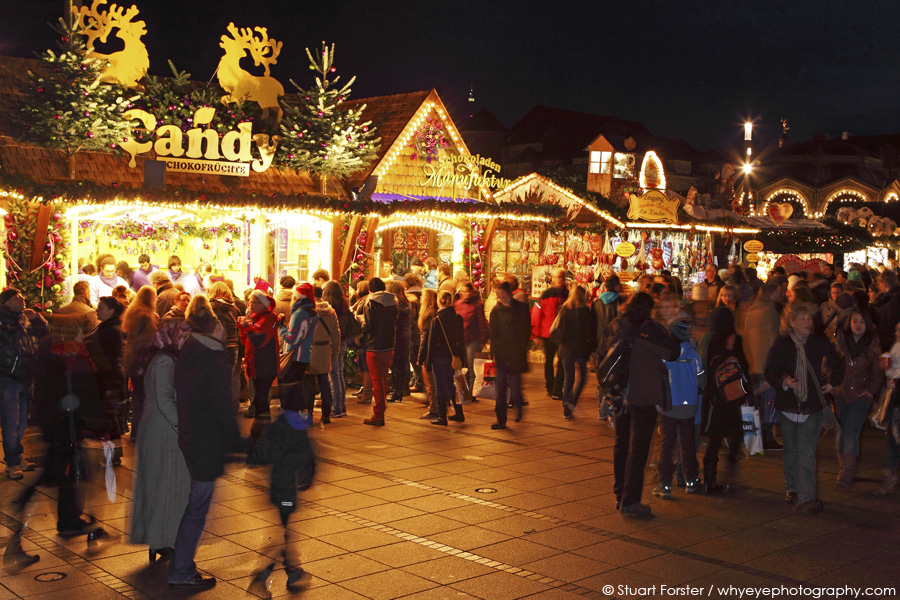 Wandering between wooden stalls ranged on Schlossplatz, the square at the heart of the city, I inhale the distinctive clove- and cinnamon-laced aroma of Glühwein (mulled wine). Vapour rises into the cold, late afternoon air from mugs gripped by people in woolly hats chatting in small groups by wooden stands still rich with the scent of pine. Some things about Christmas markets, it seems, have changed little over the centuries.

People around me tuck into seasonal cuisine, including red and white Bratwurst sausages served in bread rolls and smeared with lines of mustard and ketchup. I head to a stall and purchase a conical paper bag containing aromatic, caramelised almonds.

The popularity of German Advent markets has surged over the past couple of decades. They have, of course, even been imported to the United Kingdom. Remarkably, Birmingham’s ‘Frankfurt Christmas Market’ pulls around five million visitors a year. By comparison around three million attend Stuttgart’s Weihnachtsmarkt (Christmas market).

With the cold causing my nose to tingle and my breathe billowing cloud-like in front of me, I enjoy sipping on a mug of mulled wine while browsing the attractively arranged handwork of craftspeople who’ve made items such as multi-coloured glass candle holders and Christmas decorations from pine cones. But it’s the food and drink stalls that I return to in order to spend my Euros. 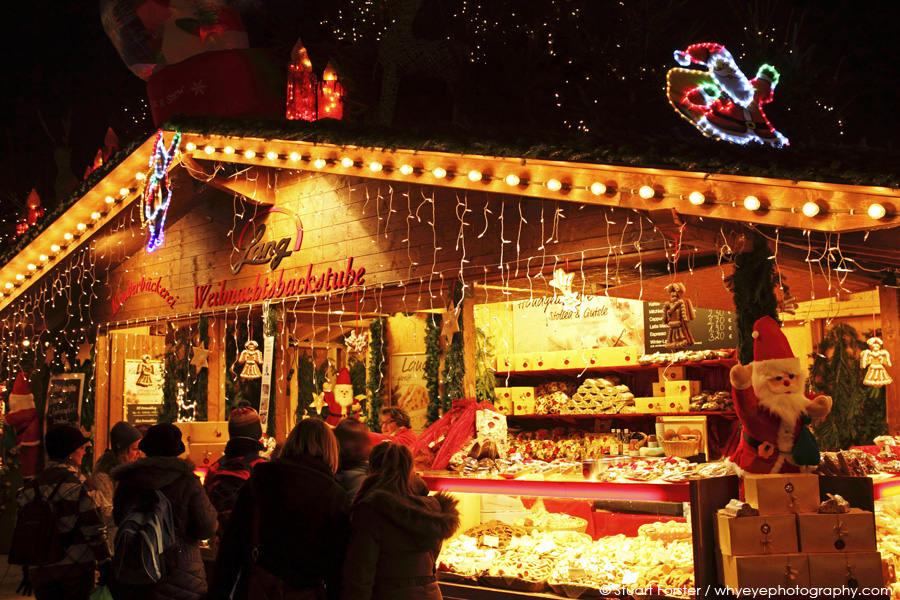 Stuttgart’s market has more than 280 stalls. They are clustered into rows on the market square – in front of the city hall – and on Schillerplatz, the square named after Friedrich Schiller, the poet and author who was born in nearby Marbach am Neckar in 1759. They also snake along Kirchstrasse and down Hirchstrasse. They will stay open to 9.00pm each day until December 23. In Germany the evening of 24th December – rather the 25th, as here in the United Kingdom – is the most important time in celebrating the season and many people prefer not to use it to go shopping. Around the Christmas tree within the colonnaded courtyard of the Altes Schloss, Stuttgart’s Renaissance style palace, I pause and listen to one of the regular concerts of seasonal music and songs.

Among the crowd by the tree I observe proceedings while fortifying myself with a Gluehwein and soaking up the atmosphere, something that’s available in abundance as dusk falls on Stuttgart.

Learn more about Advent markets across the country on the Germany Tourism website.

Stuart is an award winning features writer and photographer. He contributed a gripping tale about road travel in Kerala, India to the recently published Bradt book, The Irresponsible Traveller. To read more of Stuart Forster’s travel features follow his blog, go-eat-do.com, and his Twitter feed @StuartForster.