The event, held at the St Ermin’s Hotel in central London, saw 11 travel journalists and media outlets honored for their outstanding contribution to USA media coverage over the last 12 months.

Essentially America is celebrating its 25th anniversary and 100th edition in 2019. The magazine was set up jointly by Mary Moore as launch editor and the late Maureen Miller, who served as publisher. Mary started her career as a newspaper journalist in the USA, then was briefly a travel writer for UK magazine International.

The full list of the 10 winners are highlighted below:

Online Feature
Karlina Valeiko
loveEXPLORING
Northern Wyoming road trip: the top things to do, where to stay & what to eat

National Newspaper Feature
Nigel Richardson
The Sunday Telegraph
‘I wept because I felt the bullets; I heard the cries’

The Visit USA Association Media Awards were created 19 years ago to recognise and thank the media for their contribution to the promotion of the USA through their work. Entries and nominations are invited from journalists, publications and PRs and are judged on three main criteria: 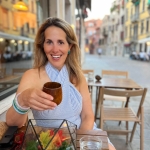