A BGTW Evening on Travel Health 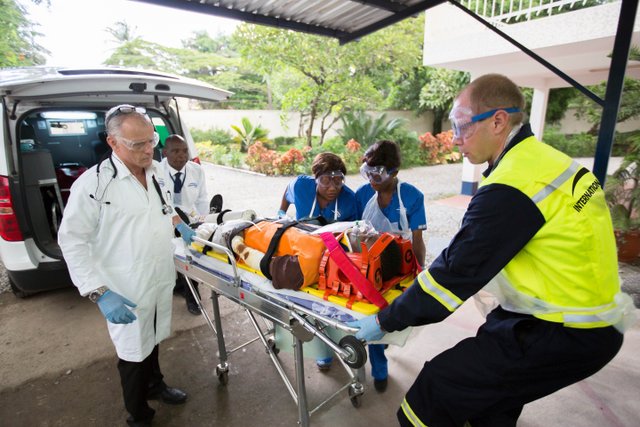 Montezuma’s revenge, the trots, whichever your preferred euphemism – most of us have suffered from diarrhoea on the road. But have we received the correct treatment? The development of a revolutionary, laptop size device promises to make diagnosis faster and more accurate.

On Wednesday evening, Dr. Richard Dawood, Medical Director of the Fleet Street Clinic, specialist in travel medicine – the first of three expert speakers at the Guild’s April session on Travel Health – described the latest technology in use at his clinic.

By miniaturizing equipment used to detect tiny changes in DNA it enables the clinic to test for the top 22 causes of diarrhea in one go and on the premises, rather than sending samples to an outside laboratory and waiting perhaps three days for the result.

“We now realize that in about a quarter of people there’s more than one cause. We have seen up to four different causes.” He showed members a slide of one set of results, which showed three – including giardia lamblia, a parasite that can lurk in drinking water and causes intestinal infection.

But what’s really revolutionary”, he told members, “is that testing can be done quickly. It takes only 65 minutes compared with up to three days using earlier methods.”

The underlying analytical technique, PMC (polymerase chain reaction) has been around for some time, but Dr Dawood, author of the seminal book Travellers Health and himself a BGTW member, said this latest technology made for faster, more accurate diagnoses. It allowed victims to be tested, if necessary, while they’re travelling. They can be provided with a cotton bud and small container enabling them to send back a tiny sample of faeces for rapid analysis. Another benefit, he said, was that the device could reduce the improper prescription of antibiotics and his reduce the risk of building up resistance. He cited the case of a young woman who was prescribed them in Cuba and who returned with persisting, severe problems. The antibiotics were actually making her condition worse.

Dr Dawood said while it was probably too expensive to appear in every GP’s surgery, he expected use of the device  become more widespread in specialist clinics. And – though the number results so far was too small to make such assessments – its use could eventually provide valuable information on which causes of travel illness were most prevalent.

On a separate issue he pointed out that yellow fever vaccination was now known to protect travellers for life. There was no longer a need for another dose each ten years. However, asked if this was known throughout the world he said there might be some places, in Africa, for example, where a certificate past its earlier sell by date might not be accepted. So if travelling well off the beaten track it was wise to get the date stamp altered so you would still appear to be within he ten year period.

Dr Will Cave, also from the Fleet Street Clinic, shared some fascinating and detailed research he had been doing into the dramatic health fluctuations experienced by participants in the reality TV series The Island with Bear Grylls. Fleet Street clinic have been providing health care support to the series, which puts people on an uninhabited tropical island with no resources for around 35 days.

They give the participants a thorough physical, dental & psychiatric evaluation before they go on the island and then re-test them when they come back. The difference, particularly in body weight is dramatic (-14%), and it leads to a raft of other issues when they suddenly start re-feeding. Their liver functions and other systems get stressed through ‘Re-feeding Syndrome’ – a condition dramatically recognised in WW2 camp victims on being freed. In many cases re-feeding precipitated heart failure & death.

Other health issues faced by participants were: extreme exhaustion, particularly in the first week or so when sugar levels dropped. This was when most participants dropped out; insect bites – most participants were pretty much covered in midge bites; and “ordinary bowel movements were not to be had by anyone. Either they were constipated or had diarrhea.”

Will’s talk had few consumer travel tips but brought home just how the classic romantic image of a palm fringed tropical island wouldn’t be anything like as idyllic without 21st century sanitation, housing and services!

The third speaker of the evening, Dr Simon Worrell, Head of Medical Communications at Healix International, talked about how they deal with medical emergencies overseas. Healix provide a range of health services & management to corporations, organisation, governments and insurers. He talked through three typical, anonymised, repatriation case studies, and how they deal with them.

Maggie slips getting out of the bath and can’t move. Derek gets crushing chest pains and is rushed to a local hospital where he is diagnosed with a heart attack. Mike develops a fever rash, joint pain and suffers from lethargy five days after he is bitten by a mosquito. Soon after, he starts getting ‘pins and needles’ in his hands and feet. The diagnosis is Zika infection leading to Guillain-Barré syndrome – a real ‘nasty’.

Simon used these examples to explain the problems travellers face when ill abroad and the priorities and practicalities they and their doctors face.

In Maggie’s case, she’s been taken to a good hospital, known to Healix and they are happy to give the go ahead for the operation she needs quickly, but she now faces a slow recovery and needs to get back to the UK. Derek is in a serious state in a remote part of Vietnam and needs to get to a medical ‘centre of excellence’, so Healix arrange an air ambulance to take him to Bangkok. Mike must be moved quickly to a specialised ‘centre of excellence’ in Martinique, where he needs to be ventilated and treated, but typically patients need to be on a ventilator for 53 days and a small medical unit like this needs the bed for other emergencies, so Mike needs to be repatriated.

How do they do it?

Maggie is flown back on a chartered flight, but she has to be flat on a stretcher so one or two nurses would be flown out to Spain to accompany her back. If she is in pain and needs anesthetics, a doctor might also be sent. The stretcher is fitted onto a rack which sits across three rows of window seats.

In Derek’s case. He has stabilised. He is off ventilation and a doctor is sent out to Bangkok to travel back with him on a commercial flight.

In Mike’s case, he needs to be artificially respirated in an air ambulance and requires a full medical team to look after him on the long way back from the Caribbean.

Simon’s case studies were a very good way to illustrate the extraordinarily expensive services and resources needed when things go badly wrong overseas, and reminded travel writers how crucial it is to not only encourage readers to buy travel insurance, but also to make sure they read the small print, and are prepared to pay ‘proper money for proper cover’.

We did manage to live stream video of this BGTW monthly event (although the slideshow lighting was a problem), which took place at the Art Workers Guild in London…