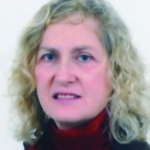 Biography :
Nicky Gardner is co-editor of hidden europe magazine. A dedicated slow traveller who writes about culture and communities across Europe (and sometimes ever further afield), Nicky believes that well-woven words can make our world a better place. She lives in Berlin where she helps run an editorial bureau which handles text and images for a webwise world. You can find out more about Nicky's work by signing up to receive her Letter from Europe, a thrice-monthly blog (usually co-authored with Susanne Kries) about European travel and culture. For more than ten years, Letter from Europe has reported from communities across the continent. The weblink above gives access to almost 400 back issues of Letter from Europe. Nicky's work on European affairs and travel has been published in many languages, among them Russian, Polish, Italian, German, Basque, Ukrainian, Spanish and English. Examples of her work in English have been published in New Statesman, The Independent, Kyiv Post, Barents Observer, Russian Life and hidden europe magazine. You can find a summary of Nicky's recent work on Journalisted.com (a wonderful resource run by the Media Standards Trust which captures work - mainly for UK markets - by journalists and some other categories of writers). hidden europe editorial bureau Nicky works with a Berlin-based editorial bureau which has a great track record in providing words and images for clients in many countries. The company provides the following services:

* Editorial reviews and opinions for literary agents and publishers
* Book packaging and production management (whether for a specialist publisher such as a university press or for a mainstream travel publisher)
* Book (and series) concept and design
* Travel intelligence (from issues of which dialect or language is spoken here or there through to whether there might be a direct train next year from Minsk to Varna)
* Specialist consultancy services on rail ticketing and rail schedules across Europe
* Web content (particularly relating to slow travel, rail and ferry journeys)
* Web design for charities and individuals who seem to have something interesting to say about the world.

The company has a strong commitment to social change and progressive values. If you

* Like the idea of working with writers and editors who retain a dash of idealism
* Appreciate that the entire capitalist social and economic architecture is oppressive to most human beings and is fatally flawed
* Worry that PR and promotion gurus are wrecking much that is to be cherished in the world of travel...

... then why not get in touch with the hidden europe editorial bureau? hidden europe is interested in hearing from creative weavers of words who shape bold and assertive prose that reveals the spirit of landscape and a strong sense of place.