What a ‘Holy Trinity’ of delight. An alliterative, three-in-one offering for our summer party in Old London Town. ‘Buses, Boats and Banquets,’ was the billing, with bridges and beer from Belgium added on.

First up was Banqueting House. In Whitehall, no less. Forget Downing Street opposite, and all the political shenanigans that are turning the nation off politics. Banqueting House has a much more interesting lineage. It’s the only remaining vestige of Henry VIII’s Palace of Westminster. 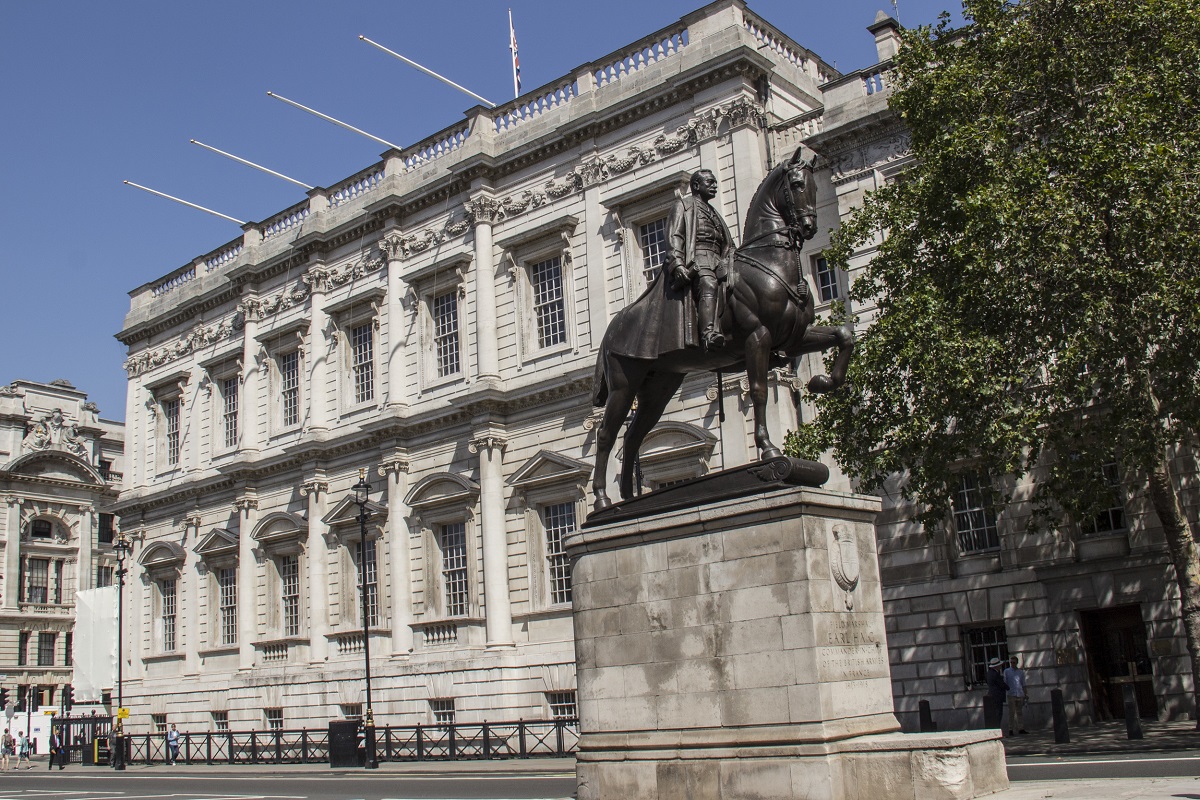 History seeps out of every nook and cranny, not to mention the spectacular ceiling, with its paintings by a certain Mr Rubens from Antwerp. Given that today’s hall was built by King James 1, who commissioned the paintings, Rubens knew where his Flemish croissant was buttered and painted the King James Apotheosis, depicting His Majesty’s ascendancy to Heaven. 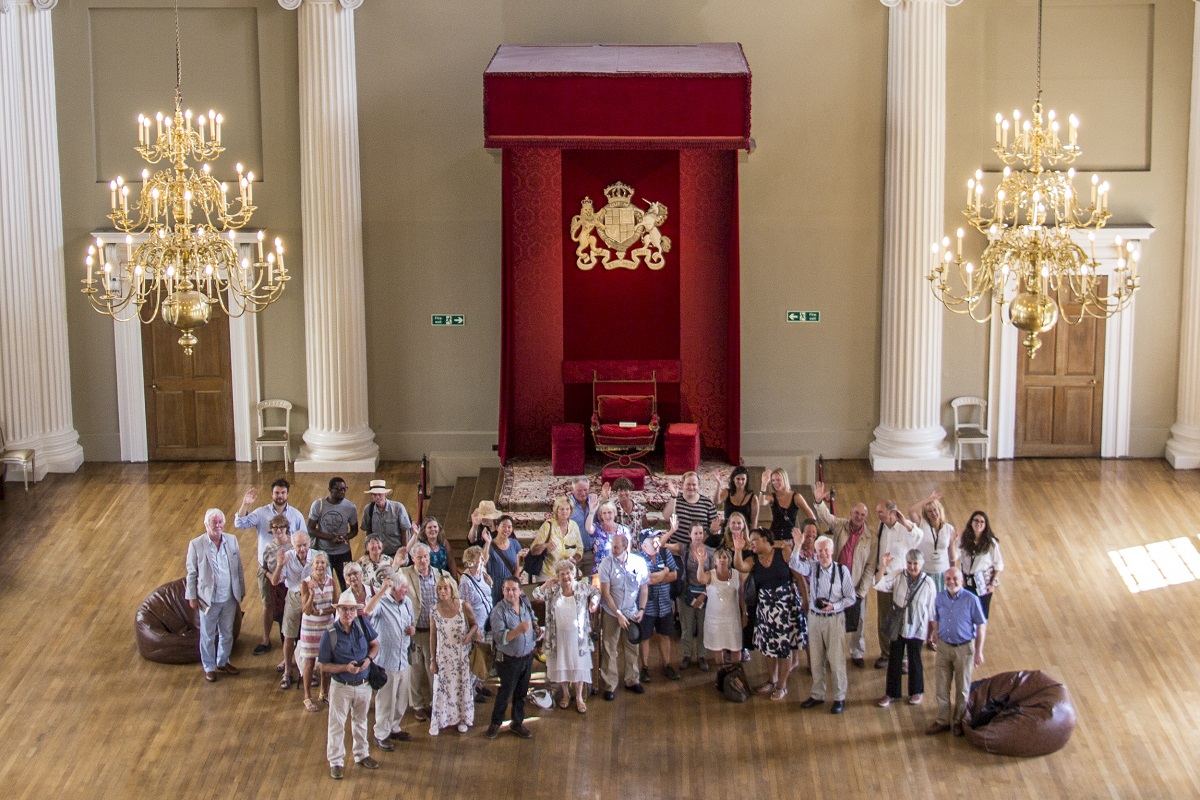 No doubt his son, Charles 1, hoped for the same lofty journey to Salvation after he was beheaded by Oliver Cromwell’s cohorts in the same building.

All this was delivered to us by our heavily-accented Parisian guide Roxane.

Not quite ‘Zut alors,’ mais certainement ‘Quel surprise! Ah, Roxane. Sting would have been proud of you.

We wanted to linger, but having a tight schedule, and whatever our predilections, there was little choice: we had to Leave rather than Remain.

The Big Bus tour of London was next. Open-top, open-mouthed at the splendour of our capital city.

Criss-crossing the Thames, bridge by bridge, gave our new guide, Phil Harris, a perfect platform for his wit and wisdom.

“And here’s Big Ben, being renovated, surrounded by scaffoldin’ . . . it’s at an angle, you know. We call it the Leaning Tower of Whitehall . . . Nah this is Waterloo Bridge, built by women,  on time and under budget. Say no more.” 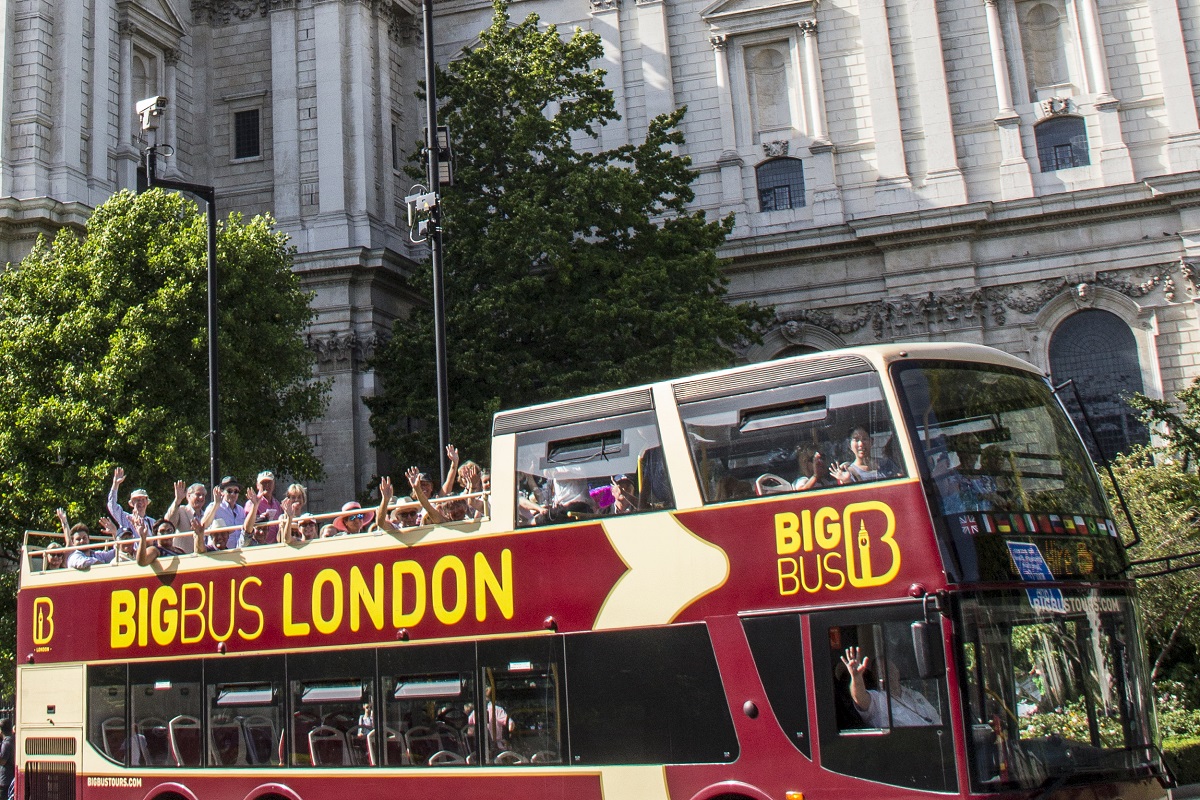 On down Fleet Street – Private Eye’s Street of Shame – with fond memories for so many of us. The Cheshire Cheese, El Vino’s, Ye Olde Cock Tavern – all those long, liquid lunches of yesteryear. “Nah this is St Bride’s Church, named after the patron saint of journalists. You have to be a proper journo to get married here. Anyone here who did?” 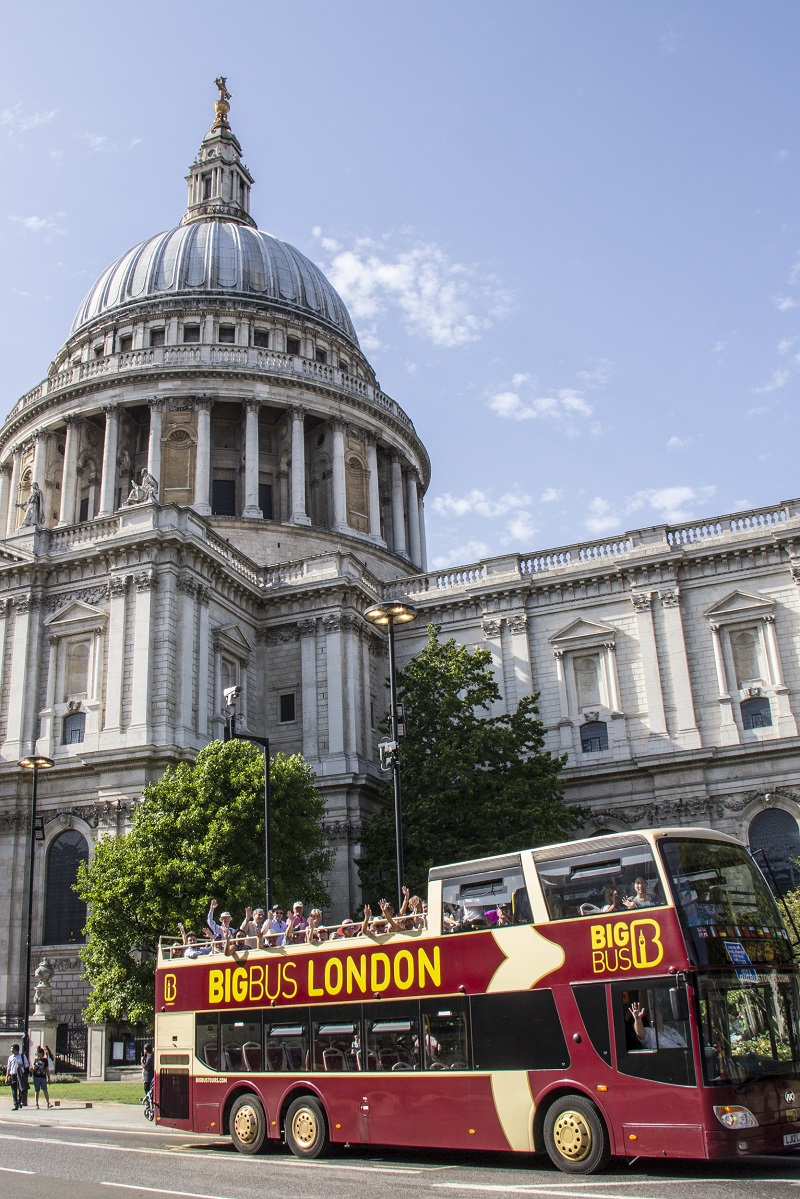 The right arm of a beaming Liz Gill shot up, in the manner of an eager Head Girl at Sowerby Bridge Grammar School, back in the day.

“Blimey, that’s the first passenger who’s ever put their hand up,” said Phil, duly impressed by our very own Daily Express Lifestyle Reporter (in the Great Days).

On we rolled. Past the Telegraph Clock with two faces (nicknamed the politicians’ clock), the London arm of DC Thompson, the Black Lubianka of the Express, the Daily Mail tucked discreetly round a Fleet Street corner. Alas, no cry of ‘Evernin’ Stannard.’ Just bundles of free copies.

Next up, the City itself. The ancient Cash Control HQ. A Bloomberg here, an HSBC there, an Old Lady in Threadneedle Street.

Then the modern – Shards, Gherkins, Walkie Talkies, Cheese Graters, and on to London Bridge – “they say the Yanks bought the wrong one,” Tower Bridge -“Scottish steel from Ravenscraig’, the Hung, Drawn and Quartered pub, Southwark Bridge, Blackfriars, on to the Embankment, and on the boat for Part Three.

We boarded the City Cruises vessel at Westminster Pier and headed upstream at 6pm prompt, with the summer sun glinting off the glass and steel of the modern, riverside buildings.

No narration needed. Just nibbles and networking, friends and frivolity. Beautiful beer provided by our friends, the Belgium Tourism people, music by Daniel Spiller, an accomplished guitarist and singer, who pitched it just right. 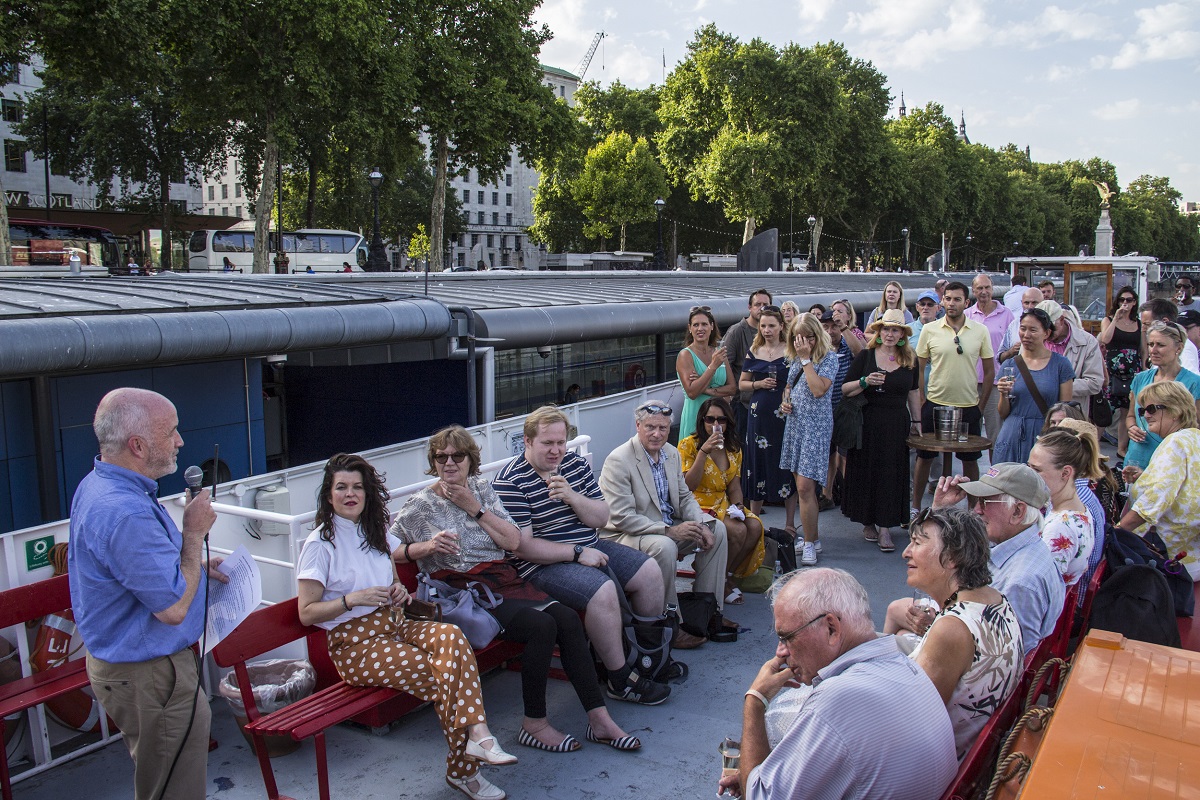 Our hostess, Clare Newman – the lady in electric blue, was charm personified, as we steamed up to Battersea Power Station, then turned to head downstream and under Tower Bridge. With the sun low in the sky, the sight was mesmerising. Then back to Westminster. All done by 8.15. 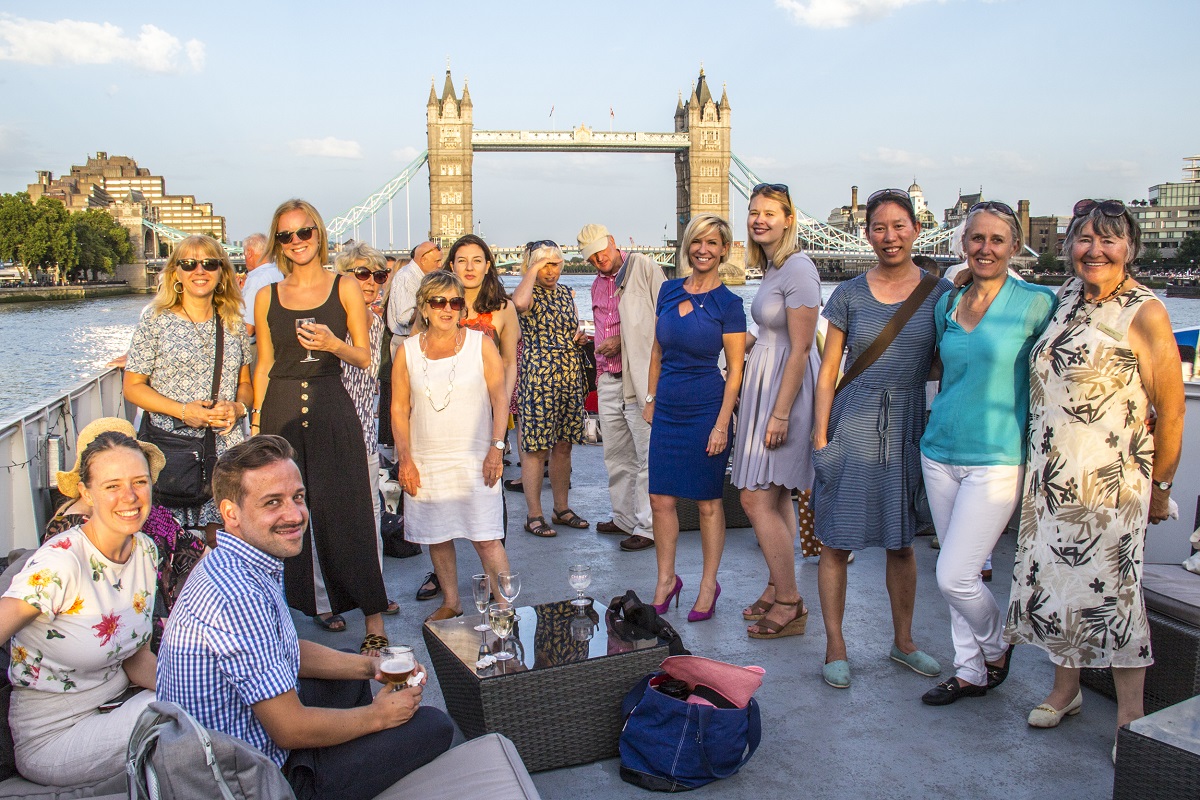 Three for the price of one, organised superbly by BGTW Board Member Stuart Render, whose mantra was ‘no fuss, no hassle.’  A perfect day. 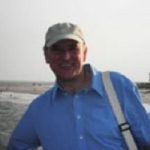