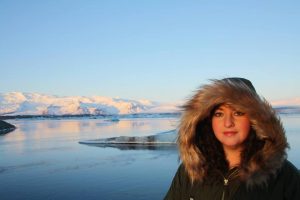 We asked her to introduce herself:

When and why did you join the Guild? I’m a very new member to the Guild, having joined in November. I’ve now been freelance for six years – longer than the four years I was a staffer – and thought it would be good to get support and solidarity from others who know exactly what that can be like.

What are you working on at the moment? Any future plans? I’ve just returned from a trip to Las Vegas focused entirely on off-Strip activities. My favourite has to be rowing the Colorado River in a glass kayak, just down from the Hoover Dam, with a bald eagle watching on. And just prior to Christmas I was lucky enough to also visit Guadeloupe, where the carnival bands were already practising late into the night.

What’s your earliest memory of travel? I never travelled overseas as a child. Paris was the first place I made it to outside of the UK, at the not-so-tender age of 16. But my earliest holiday memories are the summers spent on what were often wet, windy and wild Welsh beaches, huddled under a golf umbrella with an ice cream, pretending it was sunny. My dad, ever the optimist.

What’s your most bizarre memory of travel? Probably my first ever press trip, which was 10 years ago to South Korea. We were promised a relaxing spa visit pre-flying home. I really should have twigged when earlier in the week, when the fancy hotel spa in Seoul banished us to the hot tubs on the balcony for wearing swimwear. Yep, it was a naked spa. Which was interesting when you’ve known people for just five days.

Which is the place you haven’t been to yet but would most like to visit? India. Always has been and I have no good reason for not having made it there yet. I seem to have spent much of the past few years in the Americas and had some trips to India fall through in the past. It’s certainly on the to do list.

How did you get involved in travel writing? I was lucky enough to receive a bursary to study journalism from the company that used to own TTG. And for a year after my course I moved around a number of different trade titles as part of the graduate trainee scheme. But the first was TTG. And that ignited a passion for travel writing. Ten years later and it continues to give me some of the best experiences of my life, both personally and professionally.

Most memorable hotel stay? It has to be Leeuwenbosch lodge in the Amakhala Private Game Reserve in the Eastern Cape, South Africa. A storm took out the power so we were wandering around the property, the 1908 settler home of the Fowlds family, by paraffin lamp with walkie talkies buzzing about Cheetah being sighted just beyond the perimeter fence.

Which travel destination has taken you most by surprise and why?  Haiti, a place I feel I will bore all family and friends about for many, many years to come. I almost feel sorry for them.

What for you is the worst thing about travelling? The actual travelling I think. Or to be specific, planes. From strangers falling asleep on my shoulder, to over-recliners, and kids kicking your seat for ten hours straight. But most of all, feeling too painfully British to do anything about it.

If you got stuck on that famous desert island, what’s the one piece of music you’d have to have with you? Bruce Springsteen, Backstreets or Arcade Fire, No Cars Go. Don’t make me choose between. I can’t.