The first rule about writing commentaries is that there are no rules.

There are right and wrong ways of doing it, of course. And, on hearing a commentary, you’ll immediately know whether the writer has got it right – or, more obviously, wrong.

But, because we all have different writing styles and quirks of vocabulary, it’s no good trying to squeeze yourself into a straitjacket of rules created by somebody else. Somebody who doesn’t know your style.

There are certain things you must have. It goes without saying that one of them is a wide vocabulary. And the ability to avoid clichés.

However, the problem with clichés is that they have become clichés because they often describe a situation or circumstance perfectly. Thus villages do tend to “perch on the mountain side”, or “nestle in the valley”. But, I beg you, never, never, never describe the village square as where “…you sit to watch the world go by…”

And you mustn’t forget – especially if your experience thus far is as a writer for newspapers, magazines, or the internet – that a commentary is read only by the narrator, and not the audience.

The audience listens to your words. It does not read them.

Thus, something that looks perfect on the page, with carefully constructed sentences that bring joy to the heart of the sub-editor, is not going to work as a commentary. What works, often, is bad grammar. Sentences that hurt the eye.

You will have realised by now that I am trying to write in a “Commentary” style. Breaking up my thoughts into bite-sized chunks. Writing to break the hearts of those poor subs. Starting a sentence with a “But”, or an “And”.

But I do so because that it what people do when they talk rather than write. And as the provider of a commentary you are “talking” not “writing”.

You need a sense of rhythm, too – “cadence” when it comes to the sound of words. That is as vital as your vocabulary.

I was fortunate, when I started my career in television, to work with a first-class film editor. A chap who didn’t mind my sitting beside him as he crouched over the Steenbeck editing machine and cut film to fit the music he had chosen.

He also took the time, incidentally, to teach me how to cut and edit film which, back then, required, in addition to the aforementioned sense of rhythm, no more than a Stanley knife and a reel of Sellotape. Yes, it was a much simpler age as far as technology was concerned. When I began, we didn’t even have video recorders. But now’s not the time to go all nostalgic…

Your words have to fit within the picture sequences, obviously. You need to say what needs to be said before the film moves on to another location or subject.

And you must never fall into the trap of describing what is on the screen.
I know, that sounds crazy, but it is true. Here’s why…

You must have attended press conferences or meetings when somebody is giving a Powerpoint presentation. (By the way, I’m not au fait with current technology, so am assuming that Powerpoint is still around.)

It is really, really annoying when the person pressing the button insists on telling you what is up there on the screen for you to read for yourself.

There they are, last year’s passenger numbers, in neat colour-coded columns to indicate regional airports, or destination countries. You can take them in at a glance. You don’t need to be told what you can see.

What you do need is for button-person to give you extra information. For example, why numbers are up (or down) on previous years. How an industrial dispute last summer affected one or more destinations.

Here’s how it works with a film commentary.

On the screen, for a set number of seconds, are shots of the church in the village (not “sleepy village”, you note) of Lower Denture.

The one thing you don’t say is “This is the village church.” What you do is give the viewer extra information. “Parts of St. George’s church date from the 12th century”. Or, if you’ve time to indulge in something more flowery, and the context permits, “The villagers of Lower Denture have celebrated Harvest Festivals in St. George’s church for close on 800 years.”

Now, as the writer of the commentary, you have a great advantage over the viewer of knowing what is coming next. Use that advantage.

You are aware that the next sequences of the film are going to be an exterior establishing shot, then interior shots, of the Old Manor House on the outskirts of the village, which is now a four-star hotel.

So, you can say, over those shots of the church, that “Starting with the fourth Earl, ten generations of the Fitztightly family are buried in the crypt of the village church”.

Sorry about that “ancestral”, but I justify it because it puts into the viewer’s mind the age of the place, which is going to be mentioned in the interview with the hotel manager in about thirty seconds. Something I know and the viewer doesn’t.

You also need to know when to shut up and let the pictures and the music do the job for you. Wall-to-wall words are definitely not required.

When I moved from the BBC’s “Holiday” programme to Thames TV’s “Wish You Were Here…?” I encountered a completely different method of working, which I had to challenge and change if my contributions were to succeed.

One of those changes was to persuade my directors – and the producer – that they didn’t need every frame of a film to be covered by words.

As a writer of commentaries, I also had the great advantage of being the reporter on location, so could tailor the words of a “piece to camera” to lead into what I knew I would be writing over the following sequence.

That made life a lot easier.

A final thought concerns how you address a television audience. Indeed, the size of that audience.

You know that programme producers regard large audiences as a measure of success. However, with so many channels and the ability to record and catch up programmes, figures are certainly not what they were.

In the heady days of “Holiday” and “Wish You Were Here…?” those figures were around ten to twelve million, often more. Very few programmes get that many viewers nowadays.

However, the late Cliff Michelmore gave me a useful piece of advice on the first occasion I sat in a television studio with him, waiting to begin a “live” transmission. (Yes, I was thrown in at the deep end.)

“The average size of your audience is two or three people”, he said. “Not millions. You are talking to people in their sitting rooms. Everybody in the street, or in the town, may be watching, but the people in that sitting room don’t know it.

“So you’re not addressing an audience. You’re talking to two or three people.”

That was good advice when it came to talking to a studio camera.

It also applies to a commentary. Write as if you’re chatting to a couple of people, giving them interesting information. Occasionally, trying to amuse them.

That is what I tried to do. And also to include in that information something that would make them sit up and say “well, I never”, or “that can’t be true”. 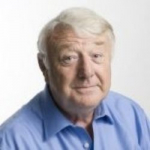