With a sudden tug, Henry sends a slug of sake over my hand. Blame it on the toy poodle in the distance. Or me for trying to hold a one-cup sake with his lead wrapped around my drinking hand.

In fairness, it wouldn’t be a one-cup if I didn’t spill a bit. The pull-tab lids take just enough of a yank to frequently cause a mishap: a damp patch on your jeans, a boozy trickle down the arm. All common place for a one-cup drinker.

For Henry—a black shiba—and me, a sake spillage is part of our routine. A couple of nights a month, we forego a walk around the park or pee-punctuated run along the riverbank for a bench and a brew outside our local convenience store.

You see, Tokyoites can be standoffish, but just as a drink can bring down barriers, so too can a dog. Combining the two has become a way to connect with other people who call my neighbourhood home.

On this night, the socializing begins with a familiar face. A familiar set of teeth gnarling at all and sundry. Kenta-kun, a fluffy tan shiba. He growls incessantly while his mum chats with me and Henry. We talk about how early both the dogs seem be waking up of late—Henry wanted a lick at 4:15 yesterday, Kenta-kun was pulling off his mum’s bedding at 5.

Occasionally, she turns to Kenta-kun and scolds him for being grumpy: the kind of soft, but rising intonation that has no effect. “Aren’t you going to play with Henry? He’s your friend,” she says at one point. I get the feeling Kenta-kun doesn’t do friendship.

Kotaro-kun, the next shiba we meet that night, does. Him and Henry exchange sniffs, then Kotaro-kun’s dad, a recent retiree, reaches into his pocket—as he does every time we meet—and finds a doggy treat for Henry. In return, he gets an ear lick.

By now, my one-cup is half done. With Kotaro-kun headed off to the park, Henry returns to carefully watching people come out of the subway exit next to the store. Every so often someone gives him a smile or let’s out an exaggerated kawaii (cute) as they pass. “Was that kawaii for me or you?” I ask him at one point. He ignores the joke. Fair enough.

He can’t, however, ignore the scent of fried chicken when a couple of labourers take the bench next to us with snacks and a post-work chu-hi. They look like they’ve had a long day—many long days—their greenish overalls stained with what could be tar, skin dark tanned in the mid of winter.

Without Henry here, I doubt we’d talk, but Henry is our bridge, and when he nuzzles in to try and get some chicken a conversation starts: one of them had a shiba as a kid; Japanese dogs are the best; I should have had my sake heated this time of year. A normal conversation with strangers. The kind you can’t take for granted in Tokyo. The kind you can get with a drink and a dog. 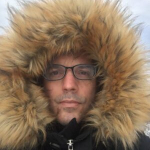